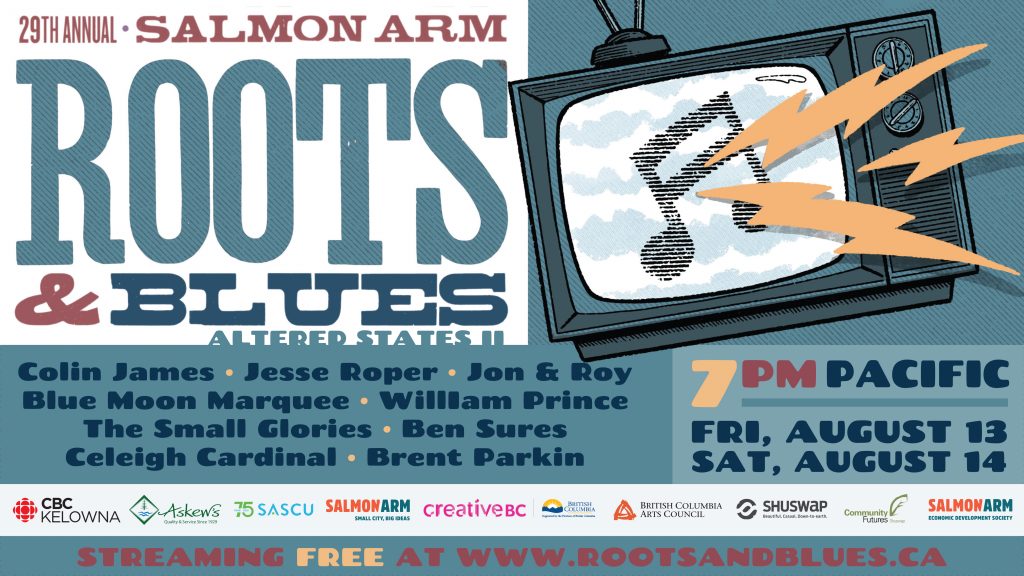 The Salmon Arm ROOTSandBLUES Festival is bringing the music even closer to home this summer.

Now in its 29th year, the festival is returning for an online broadcast dubbed Altered States II on Friday, Aug. 13 and Saturday, Aug. 14. Over two nights, nine bands will ignite the free online event with pre-recorded performances at various studios in White Rock, Edmonton, and Winnipeg.

“These acts have been on a roll despite the slowdown in cultural activity over the last 16 months,” says Peter North, artistic director of the Salmon Arm Folk Music Society (SAFMS) and ROOTSandBLUES Festival.

“We’re excited to have such talented performers to entertain our audience as we prepare for the festival’s big 30th birthday next year.”

“Both Cardinal and Prince have watched their profiles rise considerably in the last few years,” says North.

Cardinal is most noted for her 2019 breakthrough album Stories from a Downtown Apartment. Her second solo release, the album won Indigenous Music Album of the Year at the 2020 Juno Awards.

Vancouver Island’s own Blue Moon Marquee, performing for ROOTSandBLUES as a quartet, shot their festival segment at Blue Frog Studios in White Rock in early June.

Alongside her long-time partner, guitarist, and singer A.W. Cardinal, Colette created a setlist that will see Marquee perform for ROOTSandBLUES as a quartet before the duo tours Spain when travel bans ease.

“Part of his performance will include footage from his electrifying main stage closing set at the 2018 festival,” says North, noting that James will reflect on his previous ROOTSandBLUES performance during Saturday evening’s show.

“Located in the heart of downtown Salmon Arm, Song Sparrow Hall continues to serve our local community and beyond, ultimately merging with a vibrant cultural and music scene and taking its rightful place as part of a foundation for the future.”

The documentary showcases the work of seven local musicians who recorded sets at Song Sparrow Hall in the fall of 2020.

Celebrate Shuswap is free to watch on Saturday, June 19 at 8 p.m. online at rootsandblues.ca. For more information, visit acousticavenuemusic.com.

“The Salmon Arm Folk Music Society is proud to support this well-timed program, and super excited the music community has another great venue option at Song Sparrow Hall to hear live music,” says North. “And we can’t wait to welcome everyone back to ROOTSandBLUES for Altered States II later this summer.”

Altered States II will be broadcast on the ROOTSandBLUES website on Aug. 13 and 14 starting at 7 p.m. PST. No tickets are required. Stay tuned to rootsandblues.ca for more information.