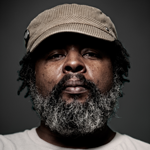 Known as a “musician’s musician”, Alvin Youngblood Hart’s praises have been sung by everyone from Bob Dylan to Eric Clapton and Mick Taylor. Born in Oakland, CA, Hart accompanied his parents during summer trips to his grandparents’ home in the hills of northern Mississippi. It was there that his passion for acoustic blues was first sparked.  His first big break came in February 1995 while opening for Taj Mahal at an Oakland jazz club. His brilliant 1996 debut, Big Mama’s Door, received widespread critical acclaim and got his career as an international touring artist off the ground.

Based on the strength of his record debut and the allure of his live shows Hart received five nominations (Best New Artist, Best Acoustic Artist, Best Traditional Blues Artist, Acoustic Album of the Year, and Traditional Album of the Year) at the 1997 W.C. Handy Blues Awards. He also received two Living Blues Awards that same year. Hart’s follow-up album, Territory (1998) received Downbeat Magazine Critics’ Poll Award for Best Blues Album. Start with the Soul (2000) was BBC’s choice for Blues Record of the Year and his fourth album, Down in the Alley (2002) garnered him a Grammy nomination for Best Traditional Blues Recording. Hart then released the self-produced (and personal favorite) Motivational Speaker (2005) a rock guitar free-for-all, paying homage to fallen and missing rockers like Phil Lynott and Sly Stone.

Hart continued to diversify his audience touring as a member of Job Cain, a hard-rocking side project he assembled with guitarist Audley Freed (Cry of Love/Black Crowes) and Nashville musician Robert Kearns (The Bottle Rockets/Lynyrd Skynyrd). In August of 2003, Hart was invited to fill in for Taj Mahal for five nights in Tokyo as a member of Kip Hanrahan’s Conjure, the world’s longest running jazz poetry ensemble. In 2004, Hart received a Grammy for his philanthropic contribution to the compilation Beautiful Dreamer: The Songs of Steven Foster. The proceeds of the album benefited American Roots Publishing, a nonprofit organization dedicated to preserving American regional culture through literature and art.

In 2006, Hart collaborated with several Memphis area musicians in the Craig Brewer cult hit film  Black Snake Moan serving as a guitar tutor for Samuel L. Jackson, and recording a duet with Christina Ricci.In April of 2007, Hart’s extended and varied interests led him to participating on a tour of Mississippi high schools as a member of the Thelonious Monk Institute of Jazz. A personal career highlight occurred in the summer of 2008 when Hart met the late Irish guitar legend Gary Moore who invited Hart, a lifelong Thin Lizzy fan, on stage to jam with him and original Thin Lizzy drummer, Brian Downey.