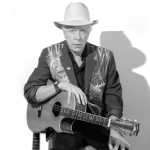 Revered as one of the top guitar players in Alberta, the reputation Amos Garrett has spent over four decades building spans beyond the geography of the Prairies, reaching into the U.S. and overseas.

Born in Detroit, but raised in Toronto, Garrett moved through piano and trombone lessons, remarking that neither instrument suited him, before finding the guitar at the age of 14. Within a year, Garrett was gigging.  “I just sort of took to the guitar – it suited me and I guess I had gotten over my awkward years as a teen. I was getting little jobs playing within a year of picking up the guitar,” remembers Garrett.

Although known world-wide as a jazz and blues cat, Garrett’s eclectic style of playing has allowed him to transcend beyond those genres that lie closest to his heart, rooted in childhood, into country-rock, pop and folk.  “Back then, we called everything rock ‘n’ roll. We didn’t call stuff blues, rhythm and blues, rockabilly – it was all rock ‘n’ roll to us,” reflects Garrett. He remembers 1954 as being “the year rock arrived,” catapulting artists such as Chuck Berry, Bo Diddley and T. Bone Walker into a world that would never forget them.  By the time he had reached college age, Garrett began learning about early acoustic Delta blues players from the 1930s such as Robert Johnson and Leadbelly.

While Garrett was hard at work developing his own sound and playing in bar bands in the Toronto area, including the Dirty Shames (which also included Chick Roberts, Jim McCarthy and Carol Robinson), the acoustic folk duo known as Ian and Sylvia Tyson were conjuring up a new sound of their own.  “My first break and ticket to the U.S. was courtesy of Ian and Sylvia Tyson,” says Garrett.

The Tysons went to work with Garrett, taking their new band, Great Speckled Bird, and their new sound, hard-hitting country-rock, off to Nashville to record and spend the next two years touring.  During this time, Garrett was rapidly developing his own technique: a method of bending more than one string at a time, which he teaches to students and through online lessons to this day. This innovation gave Garrett the ability to sound like a pedal-steel guitarist at times, while remaining rooted as a jazz player.  “Amos does that multi-note string bend like no one else…. You can put on a disc with a dozen world-renowned studio guys and pick his solos out no problem. Totally unique,” remarks contemporary Calgary bluesman, Tim Williams.

Garrett had become a skilled guitar player, one who could be picked up as a hired gun by any type of band and hold the music up. He spent the next number of years moving up through the guitar ranks and contributing his legacy to music history. He teamed up with folk artists Geoff and Maria Muldaur, played guitar in virtuoso harmonica player Paul Butterfield’s band Better Days, later on reunited with a now-divorced Maria Muldaur as her guitar player and band leader (Garrett was the player who performed the famed guitar solo in Maria Muldaur’s 1974 hit, “Midnight at the Oasis”) before finally making the decision to part with Muldaur some ten years later to go out on his own.

“I wanted to sing. I loved to sing, but there was no way I could do so being a hired gun for bands,” says Garrett, who has enjoyed a full life-spanning career both on his own as well as sharing the stage with other renowned artists such as Stevie Wonder, Emmylou Harris, Bonnie Raitt and Anne Murray (with whom he recorded her first five albums). Over the years, Garrett has recorded with over 150 artists.

Edmonton’s Holger Petersen of Stoney Plain Records has been Garrett’s manager since 1980. Garrett describes Petersen as “the patron saint of roots music in this country.”  When asked what it’s been like to represent Garrett over the last 30 years, Petersen responds, “It’s been an honour and an education for me. Amos gave me, a relative newcomer to the music industry, a chance to represent him internationally and be a part of his musical circle. I’m very proud that we’ve worked together for so long.”

These days, Garrett, who relocated to Alberta in 1989, keeps busy with three bands: his acoustic act, blues band and jazz trio. The Amos Garrett Jazz Trio is the band Garrett is the busiest with, gigging on a regular basis and looking forward to recording over the next few months.  “It’s nice to record things before performing too much and letting things get stale,” says Garrett, who likes the idea of live recording at gigs, letting the genre of jazz shine through its improvisational characteristics.  At this point, there’s not much Garrett hasn’t accomplished, at least in the music sense. “I’d like to keep walking on this side of the grass…and I’d like to catch an Atlantic salmon twenty pounds or bigger,” muses the guitar guru. Whether or not he accomplishes this goal, Amos Garrett can look back on a musical journey well travelled, proof that hard work and persistence pay off.