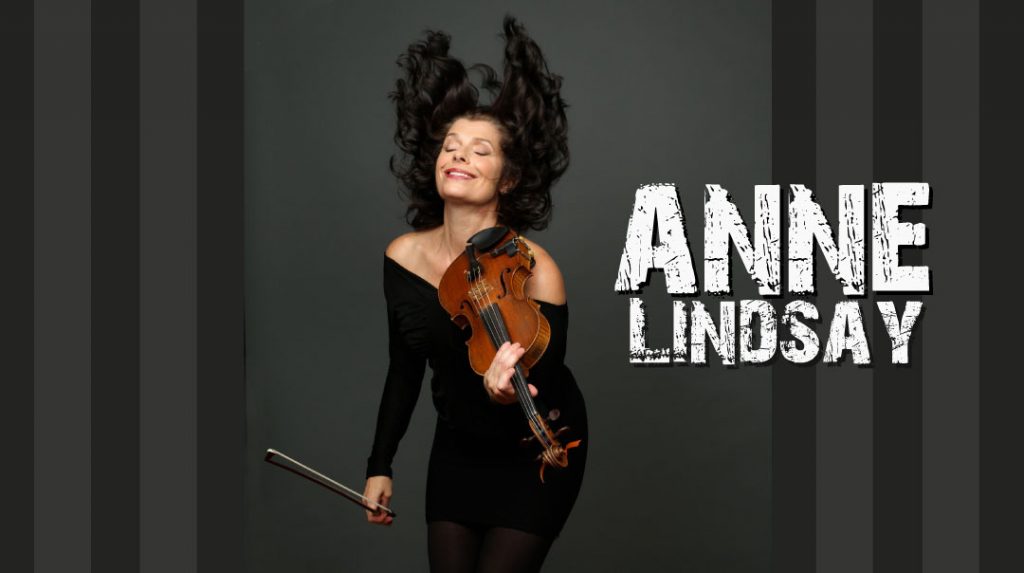 Anne Lindsay has established herself as one of the most engaging and versatile instrumentalists in Canada, adapting her unique violin/fiddle style to the eclectic sounds and musical languages of this country’s rich cultural texture.

She is an exuberant fireplug of a session-player-to-the-stars (Led Zeppelin, The Chieftains, Blue Rodeo, James Taylor, Roger Daltry) whose skills have graced many a stage around the world. Anne has played on hundreds of recordings and is a featured performer with the Jim Cuddy Band, The Skydiggers and John McDermott. She was the resident fiddler for the Toronto Maple Leafs and the stage production of The Lord of the Rings. She has also built a formidable career on her own as a musician, composer and vocalist â€” all showcased brilliantly on her new album, Soloworks.

Anne has already released three award winning CDs of her own and has won numerous awards including: Solo Instrumentalist and Producer of the Year (Canadian Folk Music Awards), Jazz Violinist of the Year (National Jazz Awards) and the K.M. Hunter Award (Ontario Arts Council).

Her new CD SOLOWORKS is a departure. It consists of 13 solo compositions that Anne performs alone, on violin, voice, piano and nyckelharpa. From toe-tapping fiddle tunes masterfully played and lyrical ballads with Anne’s heart-catching vocals SOLOWORKS is a major artistic accomplishment, and a personal triumph. In her own words:

“Music takes me far and wide, from north of the Arctic Circle to the Cape of Good Hope, through India, Europe, Central America and back and forth across Canada, this amazingly big, beautiful country of ours.”

Along the way these tunes were born – thirteen pieces to be played by one player. SOLOWORKS is the offspring of my journeys, self discovery and the
comfort found in being alone, that being solo works.

Anne began her musical studies at the age of five, specializing in violin, piano and voice. A graduate of York University, Toronto (BFA Special Honors Music), the Royal Conservatory of Music, Toronto and the Banff Centre, Alberta. Her fluency is evident in her wide-ranging repertoire, encompassing jazz, rock, classical, country, old-time fiddle, Celtic, Cajun, and Klezmer styles, and the recent addition of two new Scandinavian fiddles – the Finnish jouhikko and the Swedish nyckelharpa.

In addition to teaching at the Celtic College in Goderich Ontario and the Haliburton Winter Folk Camp she has traveled to Rankin Inlet in the Canadian Arctic to teach music to Inuit youth, hosted Canadian fiddle workshops in Finland and volunteered at the Majengo Children’s Home in Tanzania.

Her sophomore CD, NEWS FROM UP THE STREET was co-produced by Oliver Schroer and brings all of her skill into fine focus on the 14 powerful tracks, featuring her wonderful band: Colleen Allen-saxophones, Al Cross on drums, Jason Fowler on guitar and David Woodhead on bass. What really sets it apart from the first CD is the addition of Anne’s vocals, and her debut as a songwriter.

HURRY ON HOME continues the legacy – featuring Anne’s virtuoso playing and heartfelt vocals with a who’s-who of the Canadian contemporary music scene performing Anne’s twisty fiddle tunes, some sultry jazz, soulful gypsy and a hip hop beat! The CD is co-produced by Anne and her son, Tosh Weyman, a talented hip-hop artist and producer. The resulting album bridges both genres and generations with brilliant performances by musical friends. The title track “Hurry On Home”, is a neo-Appalachian duet with Jim Cuddy; “Valentine”, a poignant song about Valentine’s Day as a springboard into solitude; and Â the folktronic “May Our Minds Meet”.

Anne’s playing is incomparably expressive, capturing the violin’s unique ability to sing like the human voice. With her innovative, yet down to earth compositions, and exquisite lyrics, Anne and her violin sing together in a universal language.