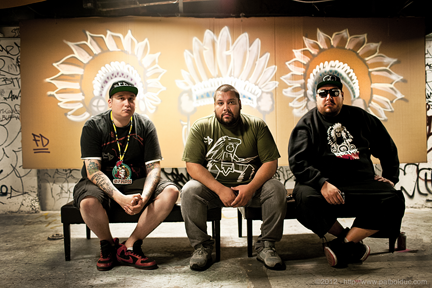 Bursting forth from Canada’s capital, First Nations Producer/DJ crew A Tribe Called Red is making an impact on the global electronic scene with a truly unique sound. Made up of three members, DJ NDN (Ian Campeau), Bear Witness (Thomas Ehren Ramon) and DJ Shub (Dan General), the group has created a distinctive style, a mix of traditional pow wow vocals and drumming with cutting-edge electronic music.

The group began in 2008 when DJ NDN, noticing that there were dance nights in Ottawa for every culture except his own, teamed up with Bear Witness to create a monthly dance party, the Electric Pow Wow, that quickly started drawing aboriginals searching for a place in Ottawa’s nightlife scene. “We just wanted to have a party,” says DJ NDN, “But soon, there were people from rural communities — reserves that were super-isolated up north — who were coming to Ottawa for school and never felt comfortable going out.”

In 2010 they added 2 time Canadian DMC Champ, DJ Shub to the crew, completing a signature sound made up of a wide variety of musical styles ranging from Hip-Hop, Dance Hall, Electronica, and their own mash-up of club and Pow Wow music.  The trio quickly garnered a local following — not just urban First Nations teens, but also dubstep fans drawn to the group’s eclectic mix of beats.

Working to reclaim the stereotypical aboriginal image, DJ Bear Witness doubles as the crew’s visual artist and creates stunning, political and sometimes humorous videos that incorporate film and pop culture references to First Nations people.  “I was raised in a hardcore activist environment,” Witness says. “My mom is seriously political and was part of the American Indian Movement in the 70’s. But by the time I was in my late teens, I was burnt out. I felt like I was banging my head against a wall. I said, ‘Forget this, I just want to party and forget about all this stuff I’ve had to deal with my whole life. I became a full-on raver kid for years, and that’s how I got into DJing.  Somewhere along the way, though, I started to realize that you could do both. You can get people when their backs are down. You get people when they’re not looking for or expecting a fight. You get them when they’re having a good time.”

The message must be getting through. A Tribe Called Red’s new album Nation II Nation entered the !earshot Canadian college charts with a bullet and now sits at number two.  The band continues to use its high profile to bring global attention to the Idle No More movement and the aboriginal political struggle in general.  As NDN has said, “… After what happened in the last hundred years, the simple fact that we are here today is a political statement. As First Nations People, everything we do is political.”