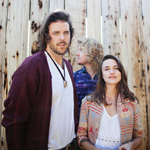 In this increasingly virtual world of ours, what makes music authentic? For some, songs are no more than tiny sentimental decompressions. But others treat music as an extension of their roots, a mirror of their travels and relationships, and a testament to both their craft and passion.

For The Ballroom Thieves, the band’s journey has only just begun, but their roots already run quite deep. Now, on A Wolf in the Doorway the Thieves find themselves taking the very idea of “roots” and creating ways to make its associated sound progress, while making its encompassing spirit glow.  Stylistically, the trio finds a captivating mélange of acoustic styles, blending folk conventions with modern hymnals, delta blues grit with rich harmonies, exploring the basic constructions of pop music while almost wholeheartedly rejecting its restrictions at the same time.   “Our own personal growth and explorations in songwriting and musicianship caused us to end up in this unique spot where we can generally feel free to be who we are at all times, which is sadly not a luxury enjoyed by all,” says guitarist Martin Earley. “I think we have a certain sound at the moment, but that sound is constantly evolving, and I hope it keeps doing that.”

Perhaps it is a blessing, but the band has a certain awareness and interest in all of its surroundings that equates to a form of musical intelligence. See them live and this becomes tremendously clear. They are a product of their community. They wager it all with every song and every performance. They study those with whom they share the stage. They feed off of the spirit of their audience. They grow from each other.

“This was a huge transition year for us in that regard and I think we are stronger than ever,” says percussionist Devin Mauch. “When money is tough, the road is snow covered, ticket sales aren’t ideal, food is repetitive, or relationships back home are struggling, that’s when you have to be able to turn to your two bandmates and relate to one another on a higher level than others can really understand. We’ve become a pretty solid and supportive unit, so I think we’ve armed ourselves to take on just about anything.”

A year of transition it was, but with new challenges came fresh inspiration. Cellist Calin Peters joined the band in September of 2013, after Mauch and Earley had been playing with a different cellist for almost two years. Peters’ immersion into the Thieves was almost freakishly natural, with the band soon after discovering ways to add additional brawn to their sound. For Earley, this meant falling slightly in love with an old Gretsch hollow body and spending countless hours studying its sound, experimenting with different ways to make it sing. For Peters, transitioning into a vocalist was a baptism by fire, but as a performer, the ultimate growing experience.   “I was terrified to try singing lead, although I always loved creating harmonies,” she says. “For a while, even knowing I’d have to sing alone into a mic during soundcheck sent me into a day long panic about that one short, unimportant moment. But the most frustrating and challenging times for this band are also the most rewarding.”

The band is now equipped with twelve new originals that make up their first full-length album, A Wolf in the Doorway. The work as a whole reflects the new dynamic, and the excitement that managed to pull all of these songs together in a matter of months.  Harmonies take shotgun on the record, lending splendid crescendos to songs like “Saint Monica” and “Lantern,” raising them from a rather subdued nature and enriching their lyrical sentiments. Peters’ lead vocals on “Bury Me Smiling” are a standout on the album, stirring in fragile melodies and a change of pace to the record. Earley’s lead vocals at times climax to throaty wails on more gravelly tunes like “Oars to the Sea” or the final track, “Wolf.” And the backbone for such experimentation comes from the distinct percussion work of Mauch, who continually seeks to expand the repertoire of sounds from what little of a setup he brings on the road.

“It bears mentioning that Dev invented his particular style of drumming in his college days and, just as you might expect, that kind of thing comes with somewhat of a learning curve,” says Thieves co-founder Earley. “He’s constantly exploring the limits of what he can do with his setup and adding to it in the process, and that creative energy definitely contributed to the path we’re on.”  It brings to mind the early days of The Ballroom Thieves, which really weren’t all that long ago. Limited to just a dorm room, an acoustic guitar, and a djembe, Earley and Mauch first began making music together in 2010 while attending college just south of Boston. The minimalism of these early jam sessions continues to permeate in the purity of the band’s recent music, while songwriting has only grown in complexity.  But the content of these songs isn’t just a product of “practice makes perfect.” All three of the Thieves are quick to point out that the foundation of their latest work is a reflection of their travels, their interactions, and their time on the road. The band has shared the stage with bands like The Lone Bellow, Houndmouth, and fellow New Englanders Dispatch over the last couple of years. Playing in front of six and playing in front of six hundred both happen with regularity, presenting their own sets of challenges and rewards. Of course, one of the greatest takeaways is the shared experience with any audience, and the creative fuel that it continues to produce.

“The experiences we have with friends, fans, and strangers when we perform is what keeps me wanting to explore this art form further and discover all that it has to offer,” says Earley. “Simple human connection is a beautiful thing and I’m very grateful to be playing music that allows me to experience such feelings on a regular basis.”  For The Ballroom Thieves, this family tree has only just begun to bloom, but its roots give the trio a strong and solid structure from which to continue to build. A Wolf in the Doorway documents this growth in the most authentic way, sending any listener off with a heavier heart and a purer soul than when they arrived.