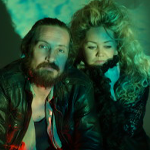 Bellstop!…alternative folk or rock or not?

Regardless of the answer Bellstop,  is definitely something raw and original and true.  Runar and Elin  have been together for years, living a life full of adventure and risk – traveling around the world  seeking freedom from within – and it all comes out in their music.

It’s been an interesting journey, from playing a full show for an audience of one to playing impromptu shows in front of thousands, and all points in between; playing in a Chinese shampoo commercial is just another gig for Bellstop.  Well, they do have good hair.

From China back to Iceland – In fall 2010 the two began loving and living and playing in Reykjavik, working on their album ‘Karma’ which came out in June 2013.   Karma tells the story of Runar and Elin’s life for the past 3 years.

Nothing is held back, it’s all there.  Just listen carefully.  Bellstop is a band, it’s a couple of capital ‘I” individuals, it’s a carnival ride from Iceland.  It doesn’t belong in a box…for now let’s call it Folk&Roll!