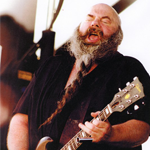 Always an audience favourite, Bill Durst has long been compared to the best guitar player/singer/entertainers anywhere in the world. Bill has written and recorded over 100 songs on ten albums including seven charted Canadian radio hits. After the early success of his band Thundermug in North America and Europe, Bill was acclaimed as one of the top songwriters in Canada, signing with CBS (now Sony) Publishing, and releasing his first two solo albums in 1984 and 1989.

In between these two albums, as a side gig, Bill played in “the biggest bar band in Canada” Tres Hombres, a ZZ Top clone band, and that’s how he got his beard started!

As for Bill’s live performance, Herman Goodden wrote “Durst delivers…feedback…echo effect… powerful singing, freak harmonic, buzz sawing bottle neck guitar and supercharged intensity are all components of Bill Durst’s showmanship. Durst, the legendary virtuoso guitarist, performed a radical re-interpretation of Jimi Hendrix’s “Little Wing” which opened with some incredible mewings that he squeezed out of his fret board, suggesting an overhead migration of gigantic seagulls”.

When you see Bill play or listen to his cds, you are in for a treat. Co-writing with friend and former Thundermug band mate Joe DeAngelis has resulted in a wonderful synthesis of fun and exiting blues, roots, rock music and an unforgettable cd – “The Great Willy Mammoth” – featuring the full mature onslaught of a true artistic gem / world class guitar player / singer,
songwriter / entertainer named Bill Durst.