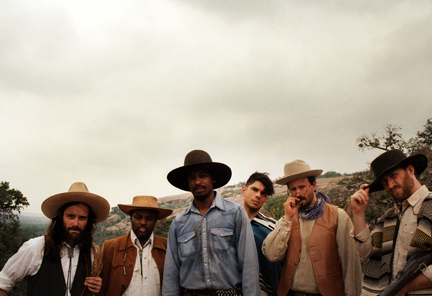 Joe Lewis hails from Austin, TX – the collision center where Southern soul meets mid western blues and vagabond punk.  Unable to keep away from the infectious music scene Austin is infamous for, Joe Lewis soaked it all in and soon found himself purchasing his first guitar while working in a pawnshop.  The rest is history.

“Electric Slave” kicks off with in-your-face opener “Skulldiggin,” which showcases Joe howling in true Joe-Lewis-fashion all the while highlighting just how ballsy Lewis can really get.  Of the album title, Lewis says, “Electric Slave” is what people are today with their faces buried in their iPhones and the only way to hold a conversation is through text.  The next step is to plug it in to your damned head.”  Much like not wanting to be a slave to our cell phones, Black Joe Lewis refuses to be confined to genre-defining boundaries or cater to only one of his many musical influences on his third LP.  Lewis still has plenty of women chasing, hard-knocks and all-around good time tales to tell as we hear on tracks like “Young Girls,” “Make Dat Money,” and “Come To My Party.”  And as always, Lewis somehow finds a way to make tracks full of horns and blues riffs rival the likes of rocker Iggy Pop.