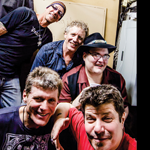 Brothers Keeper is a trio that honestly displays heart and soul and rock and roll.

The core band consists of Scott Rednor on guitar, Michael Jude on bass, and John Michel on drums. All three, hailing from an attitude ridden east coast background, have transplanted to the Vail and Roaring Fork Valleys in Colorado for both the mountains and the music. For the past 15 years, Michael and John have steadily played with the John Oates Band (Hall and Oates) and many other world renown musicians, while Scott has been involved in recording and touring projects on a national level for more than 20 years. Scott now owns Shakedown Bar in Vail where he serves as Music Director bringing in national talent for locals and tourists from around the world. It is there that the trio has made their home amongst an amazing cast of rotating musicians as well as several “Brothers Keeper Featuring Series” shows. The first of the series featured John Popper of Blues Traveler, and Jono Manson.

Rednor had met Popper on the HORDE festivals in the mid 90’s and they had done quite a bit of touring together. Jono Manson is from New York City and helped pioneer the Nightingales/Wetlands uprising that had spawned Phish, Blues Traveler, Spin Doctors, and many more successful bands. Rednor had opened up for High Plains Drifter, which was a super group of sorts, fronted by Manson, featuring members of a few of these bands. It was the recollection of that raucous rock and roll that inspired this initial collaboration with Brothers Keeper.

After that first show in which Popper and Manson joined Brothers Keeper, Popper brought into play the idea of doing a project together, which led the band to write and record the album that will be released on 8150 Records late this summer, entitled “Todd Meadows”. This debut from the band is an Americana/Rock n Roll album, featuring 5 lead singers, bringing together their wealth of experience, and a wide range of musical styles. The LP was written by the band in Santa Fe in April of 2013, and recorded at Ardent Studios in Memphis, Tennessee in June of 2013. Other guests on the album include Jason Crosby (Phil Lesh and Friends), Glenn McClelland (Ween), DJ Logic, Joel Guzman, and Rob Eaton Jr. This is a Rock n roll outfit like you haven’t seen in a long, long time!