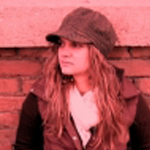 “An insightful songwriter, and soulful vocalist, she engages her audiences with rare warmth and honesty” – Lionel Rault, CKUA Radio

Award-winning songwriter Chloe Albert overcame a severe bout of writer’s block to create her imposing new release, Dream Catcher.  On the listeners side, I – and an increasing coterie of admirer’s can attest that any journey complemented by the Albert catalogue will produce rewards.  The Edmonton-based singer/songwriter is on to something.  Something good.

Born and raised in the Alberta capital, Chloe is the daughter of a dad from the small maritime city of Rimouski, QC, her mother a Vancouver native.  It was a very musical household with her mom’s acoustic guitar always in easy reach, and the likes of Hendrix, Raitt and The Beatles on the family box. Piano plinking began at age five, guitar in her teenage years, and eventually percussion, going on to play rhythm on ‘The Engadine Sessions: Come To The Mountain‘; a collaboration between Juno nominee Suzie Vinnick, Cara Luft, Kat Danser, Cori Brewster and Karla Anderson, and Chloe.

Apparently there wasn’t a huge degree of tortured hand-wringing over a calling.  Off she was to MacEwan University’s music program in the vocal department.  The problem was that she had hardly performed, that part didn’t come naturally.  And so, the traditional route (slog) of the professional musician began, with the usual stops of office and waitressing jobs, the labyrinthine cosmos of grant applications, and eventually, a self-generated CD, 2008’s Dedicated State.  That impressive debut won Albert an Emerging Artist of the Year award at the Canadian Folk Music Awards and serious support from CBC and CKUA networks along with the admiration of lights such as Blue Rodeo’s Jim Cuddy.  Strong showings in songwriting contests at Nashville’s East Side Music Festival and the Calgary Folk Festival provided encouragement, as did her work waitressing and performing at Edmonton’s venerable Blue Chair Cafe, long a kindly incubator of promising talent.

Indeed, Albert pronounces the last couple of years as a time of “coming alive,” and the inspiration for Dream Catcher.  Without succumbing to preachiness, its about spirit, shared spirit, with a strong message of a dust-yourself-off-and-get-back-on-your-feet-again type of wisdom.

Although Ani Difranco was an early inspiration and Albert- who currently plays in three Edmonton bands of diverse stripes – says her musical passions of late stretch from Sam Cooke and vintage soul to old country and blues.  That said, she’s not about to be compartmentalized about her own work.  In fact, her canon to date roughly falls into the intersection of folk, country, and pop, with jazzy and bluesy highlights here and there.  The strong album closer ‘When The Night Fell’ might have been pitched to a Motown A & R operative years ago, for example.

Dream Catcher was independently released this past June and was #1 on Alberta’s CKUA radio charts for the entire month of June and part of July.  It also reached #1 on Halifax’s CKDU station, and was #5 on the Canadian Folk/Roots/Blues charts.  The album is receiving rave reviews, and there’s more to come!