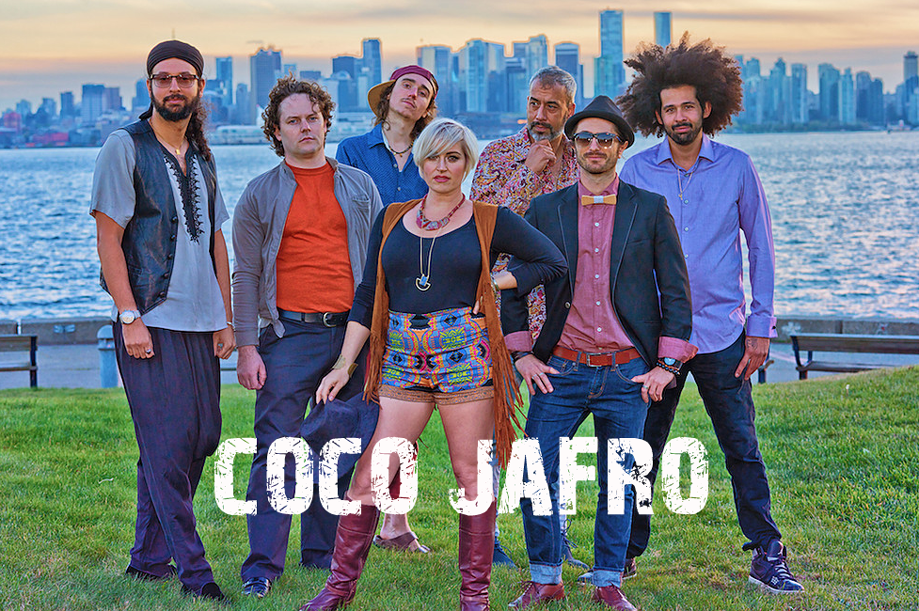 Coco Jafro is a hard hitting force to be reckoned with, unifying the masses with their electrified, funky global rhythms. They bring together the schools of Funk, Soul, Jazz and Afro-beat providing a unique sound that flows from a foundation of deep set grooves. Moroccan born, lead guitarist Amine Said’s musical roots provide an exclusive sound with the proven power to instantly synchronize your soul forcing the crowd to bend and sway.

“It’s a warm summer night. The stars are bright and a hint of Coco Jafro travels on a soft breeze. Ohh yeah.
Coco Jafro isn’t the latest fragrance from Chanel, it’s a new Vancouver band that nestles in the sonic embrace of soul, funk, R and B, and the global rhythms of Africa, the Americas and beyond.

Fronted by the gifted Montreal-born singer, Karina Morin, this group immediately hooks you with their deep grooves and alluring vibe. The players all love what they do and they love doing it for an audience. Their international perspective comes naturally by way of band mates who were born in exotic locales including Morocco, France, Mozambique, Quebec and British Columbia’s own “City of Rainbows”, Prince Rupert.

Their original material is gaining attention and airplay on CBC and their live shows include covers by the likes of Prince, an obvious influence on these talented musicians.
I have only witnessed Coco Jafro live once,  as a 6-piece. As great as that was, the full band must make quite a sound. The full ensemble includes Amine Said (guitar), Karl Oystensen (keyboards),Karina Morin (vocals), Dominic Conway (tenor sax), Jean  Le Doujet (bass), Sangito Bigelow (percussion), and Chris Cuoto (drums).”