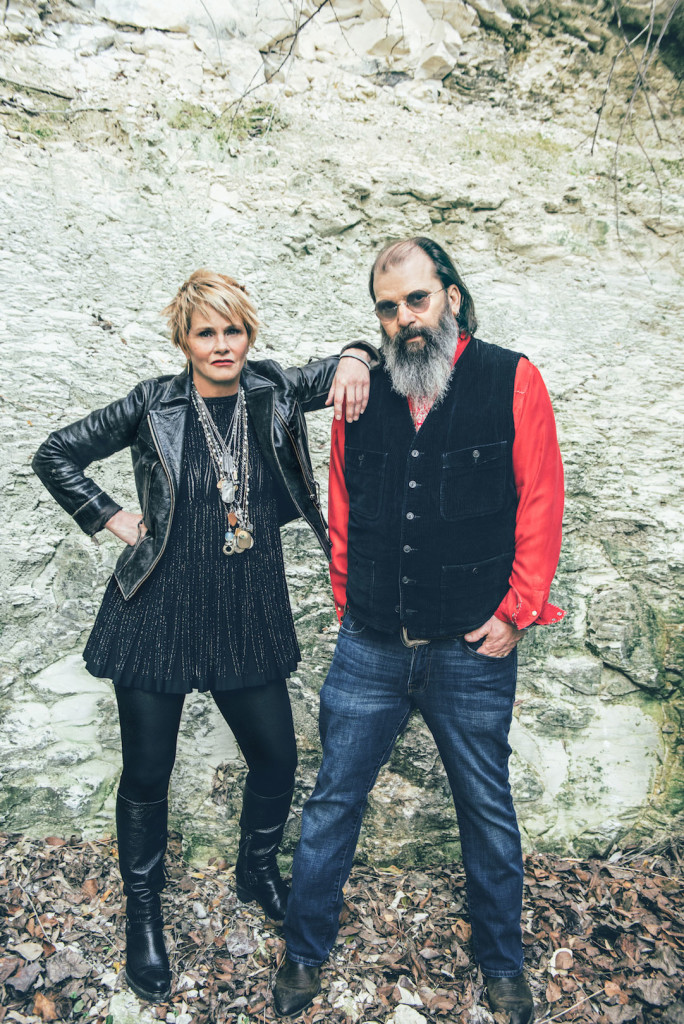 Shawn Colvin and Steve Earle both remember the night they met. It was nearly 30 years ago, and Colvin had been invited to open a solo acoustic performance by Earle at the Iron Horse in Northampton, MA. Though their interactions that night were limited to some cursory dressing room pleasantries, each left more of an impression on the other than they may have realized at the time.

“I was knocked out with her,” says Earle. “She was a real live folk singer.”

“I was a big fan—still am—and I was thrilled I got to meet him,” reflects Colvin. “Steve’s just brilliant. He’s a very simple writer in an extremely profound way. I love his singing and his songwriting, he’s just got the whole package.”

Anyone in the audience that night could have sensed the critical acclaim, GRAMMY Awards, and immense impact on popular music that awaited both artists, each already well on their way to becoming widely considered among America’s greatest living songwriters. The long time friends and admirers have now reunited to record their self-titled debut as Colvin & Earle, a true standout for each in a catalog chock full of highlights and masterpieces.

The duo’s collaboration began two years ago with a phone call from Colvin, who had just wrapped up a joint tour with Mary Chapin Carpenter and found the experience offered a different set of artistic rewards from her typical solo touring.

“I found I really enjoy sharing the stage with someone for the whole evening,” says Colvin. “I love being a backup musician, I love singing harmony and being a rhythm guitar player and getting to be entertained by another artist I admire. Touring alone is something I do very well and it’s the right thing for me, but it was a nice change to have this camaraderie and repartee with someone onstage, and when I thought about who else I’d like to share that with, I immediately thought of Steve.”

The first show began with little more than a sound check for preparation, but they discovered an immediate spark, building from initially trading songs and stories back-and-forth to slowly, organically contributing guitar and harmonies to each other’s tunes throughout the night. The Albany Times Union hailed their show as “a near perfect pairing,” while The Morning Call said they “spur each other to greater heights,” and The Cleveland Plain Dealer called it “a joy to be able to witness two of the greatest at their craft.”

Earle, who’s toured with his full band in recent years, discovered a special chemistry that was unlocked when his voice met Colvin’s over acoustic guitars and mandolin every night on the road. He was particularly moved when she joined him on his song “Someday,” a track Colvin had recorded for her 1994 GRAMMY-nominated ‘Cover Girl’ album.

“The first time you’d really hear us sing together in harmony during the live show was on “Someday,” reflects Earle. “That’ll always have to be in the set, because Shawn recorded it when I was completely off everybody’s radar, including my own.”

The shows were so special to Earle that he proposed they record an entire album together in the spirit of the tour, co-writing brand new material to sing in harmony alongside inspired covers like the Rolling Stones’ “Ruby Tuesday” and Emmylou Harris’ “Raise The Dead.” Arrangements were made to hole up in mutual friend Buddy Miller’s Nashville home with an all-star band including guitarist Richard Bennett (who had played on Earle’s seminal ‘Guitar Town’ album), drummer Fred Eltringham (Willie Nelson, Kacey Musgraves), and bassist Chris Wood (of Medeski Martin & Wood/The Wood Brothers). With Miller at the helm as producer and baritone guitarist (Earle calls him “the greatest country singer alive and a monster guitar player”), the band worked through fourteen songs in a week-and-a-half, capturing the spontaneity and magic of Colvin & Earle’s live acoustic shows, while at the same time fleshing out the arrangements with alternating moments of subtle grace and raucous grit.

“The approach in the studio was that if you can play and sing, then it’s not rocket science,” laughs Colvin. “We set up in the house together, Steve and I in one room and the rest of the band in another. We’d rehearse a time or two and record it live, but Steve and I had our lyrics on music stands because the material was so fresh we hadn’t even memorized the words yet.”

It’s a remarkable revelation, considering the conviction and authority with which they inhabit their characters on the album. In a rare change of pace for both artists, the co-writes were true, even-split co-writes, with Colvin contributing a verse here or a melody there and Earle often bringing in a chorus or a chord progression. Album opener “Come What May” is a perfect example of the way their creative process gelled into a gorgeous, cohesive whole, and it’s a prime showcase for their sterling harmonies.

“That was the first song we wrote together,” remembers Colvin, “and it’s a great beginning for the album because Steve hesitates to call any of these songs ‘duets.’ This song is just two people singing to each other.”

“Tell Moses” is a rollicking slice of folk-gospel that works its way from Egypt to Ferguson, MO, while the lively “Happy and Free” is a master-class in what had first impressed Colvin about Earle, the ability to make the simple profound. The album’s more melancholy moments cut close to the bone from Colvin & Earle’s personal experiences, like the winsome “The Way That We Do” and the self-reflective “You’re Right (I’m Wrong).”

“We’ve both been around for a while and we’ve both got shit in that area to write about,” says Earle with a laugh. “For my part, you can’t be married as many times as I have and think its somebody else’s fault that you can’t stay in a relationship.”

For the album’s four covers, Colvin & Earle each picked two to record, pairing “Ruby Tuesday” and “Raise the Dead” with a new interpretation of “You Were On My Mind” that blends elements of Ian & Sylvia and the We Five’s versions (Earle’s choice), and a bluesy take on The Nashville Teens’ “Tobacco Road” (Colvin’s pick).

Perhaps the most touching moment, though, comes with the album’s closer, “You’re Still Gone,” which began with some lyrics written by Miller’s wife Julie.

“Several years ago Julie handed me these opening verses,” remembers Colvin, “and I brought it to Steve during this session because I had written more verses for it, but I didn’t know where to go from there. Steve fell in love with the song and wrote the choruses. It’s really sentimental to me because my father had just died, and Julie’s lyrics inspired me to write the next verses about my dad. Steve didn’t know that, but he came up with a chorus that says, ‘You’re still gone,’ and then it turned out that Julie had actually written the first two verses for her brother, who had passed away years ago.”

Such is the deep emotional connection and spiritual bond that enables this record to be so much greater than the (already great) sum of its parts. Few things can touch the magic of artists so in tune that they seem to be able to read each other’s minds. It would have been impossible to predict backstage at the Iron Horse all those years ago, but Colvin & Earle have gone from sharing a stage to sharing a band to sharing one of the finest records in either of their storied careers. That night in Northampton turned out to be the beginning of a very beautiful friendship indeed.