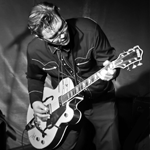 Cousin Harley is a rocking hillbilly trio and the central touring project of Paul Pigat. Considered to be western Canada’s premier rockabilly and roots bands his Cousin Harley style is deeply rooted in the playing of Les Paul, Charlie Christian and Link Wray with a modern twist to create a style that is exhilarating in its intensity, yet at the same time fluid and precise. The band has a hard-earned reputation for delivering everything from hot-rod rockabilly to foot stomping vintage country and western swing. Paul is joined by Keith Picot on upright bass and Jesse Cahill on drums to create an unstoppable rock ‘n roll wrecking crew. From classic honky tonk and cow punk rippers, to a helping of western swing and classic jump blues, Cousin Harley plays in the old tradition — slugging it out hot and heavy in roadhouses across the land and across the seas.

Paul Pigat started playing the guitar at 11 years of age and was gigging steadily in downtown Toronto by the time he was 12. Through a lifetime dedication to live performance, recording and study he has developed into a superb guitarist, vocalist and songwriter. An extremely versatile artist, with projects ranging from delta blues to classical music, he heads four diverse Vancouver bands and is in high demand as a sideman. Paul’s creative use of tone and dynamics is a hallmark of everything he plays, and his sense of rhythm is both sophisticated and dead on. His superb talent as a guitarist is matched by his songwriting and his vocal abilities; a warm baritone equally at home singing flat-out rockers and relaxed country swing.

Jesse Cahill started playing drums at a young age and worked his first professional gigs at 16 in restaurants and clubs in his hometown of Victoria, British Columbia. Jesse has become one of the busiest drummers on the Canadian music scene. He has worked with jazz legends and has performed, toured, and recorded with many internationally recognized artists. He can also be seen and heard regularly with top Canadian artists including Cousin Harley. His playing can be heard regularly on CBC Radio One and Two and he has been a featured guest and performer on Jazz Beat, Hot Air, and Canada Live.

Unforgettable is what a performance by stand-up bassist Keith Picot is. Better bass players one will encounter but a bass player who gives more of himself and is such a joy to watch is decidedly much harder to find. Whether singing and leading his own band, or supporting the talent of such bands as: The Twisters, Cousin Harley, Joe Dollar and Juno Award winner Kenny “Blues Boss” Wayne, he always gives 110 percent. With a hard hitting slap style all his own he can drive a beat like the devil, then equally and effortlessly draw out the sweet tones of a saint. You are guaranteed pleasure when watching Keith Picot do what he loves to do.