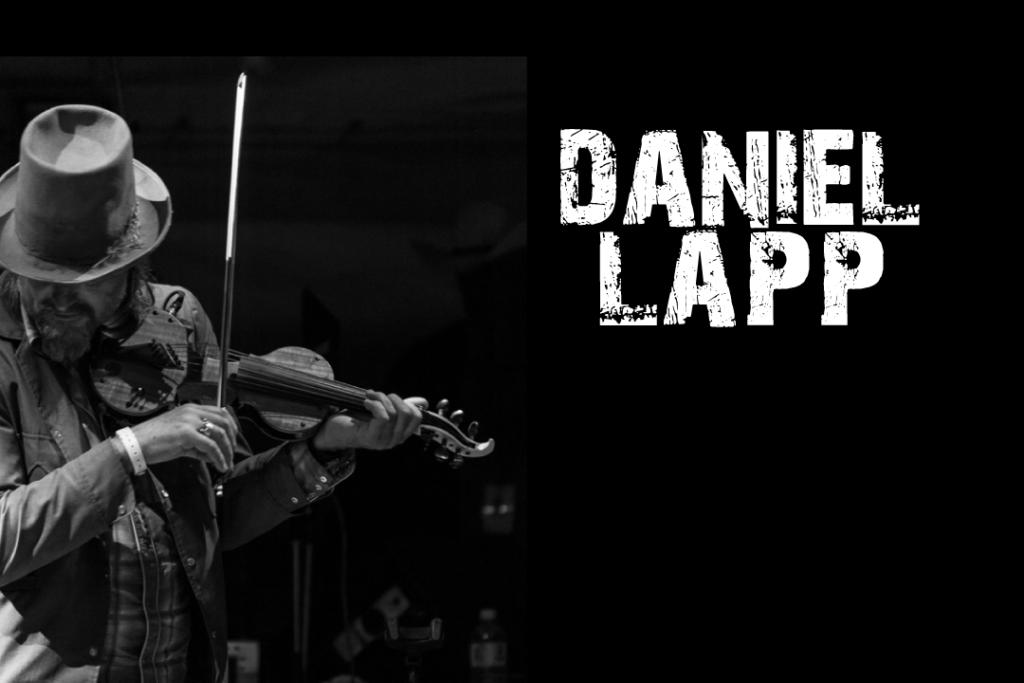 Daniel Lapp grew up in Prince George, BC in a musical house with deep prairie fiddling roots. He received his BMus from UVic studying classical trumpet and over the past 30 years has toured across Europe, Australia, China, Israel, the USA and Canada playing a plethora of musical styles from jazz to electronic music. He has performed on a variety of instruments with many recognizable names such as Spirit of the West, Rickie Lee Jones, 54-40, Gord Downie, Barney Bentall, Jim Byrnes, Jim Cuddy, Elvis Costello, Lou Reed, Stephen Fearing, Ed Robertson and Roy Forbes. He started the BC Fiddle Orchestra in 1994 that continues to inspire dozens of young ‘teen’ fiddlers and last fall started an Old-Time Dance Band curriculum with twenty five 8 – 13 year olds. He founded the Victoria Fiddle Society in 2001 that holds monthly jams with up to 100 participants of all ages and abilities and Daniel Lapp’s House of Music Society that enriches the community with various outreach programs. He has lead the Joy of Life Choir, now with almost 100 non-auditioned adult members, for almost 20 years and also leads an adult folk ensemble called Folkestra. In 2010 Daniel was a featured fiddler in the Opening Ceremonies of the Vancouver Olympics and has recorded many albums of folk, jazz and electronic music. In 2012 Daniel received the Queen’s Diamond Jubilee ‘Service’ Award and in 2013 was the recipient of the Canadian Folk Music Association ‘Innovator’ Award for his contribution to Canada’s fiddle culture. This includes his 20 year commitment to collecting indigenous BC fiddle tunes which includes over 1000 compositions by over 100 BC composers.

In 2005, inspired by his farming, fiddler Grandpa Dan’s ‘house of music’ Daniel started a business called the House of Music in Esquimalt, BC. Over the 3 years that it operated it had over 20 teachers and 300 students learning many styles of music. His experience running this business lead to his appointment as the first Artistic Director of the School of Contemporary Music at the Victoria Conservatory of Music in Feb. 2014. In this position, Daniel is developing new curriculum and ways of inspiring the community to engage in music for themselves and with each other as well as an innovative Diploma program in Music Performance for fiddlers and all instruments through Camosun College.