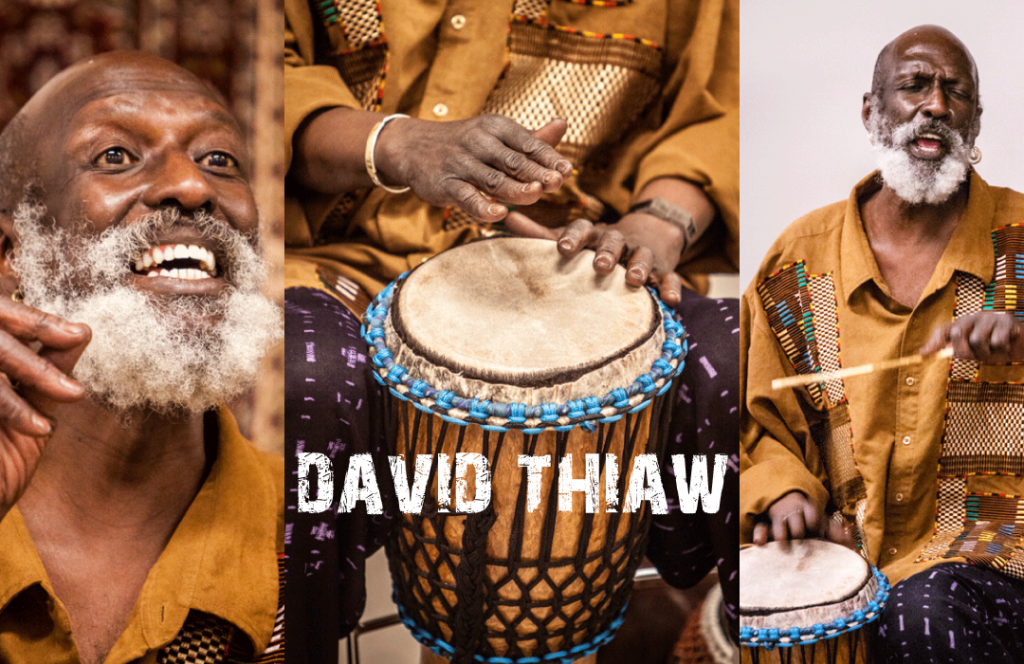 David’s first home was in Senegal, the western-most country in Africa. He has memories of growing up in Dakar, with the scent of the Atlantic,  the sand of the beaches and the music of the people inspiring him.  African and World music have been David’s lifelong passion.  He formed his first rhythm band when he was 14 years old, and began a lifetime of world travel learning about musical genres and their relation to – if not their debt to – West African rhythms.  David has been playing music his entire life, but nor did he ignore his formal education – a total of 26 years of recognized educational attendance, including 7 years of classical education in Latin and Romance languages.

Over the years, David has been able to travel and play in all continents and many countries including Russia, Singapore, Brazil and others. In the 1970’s, he made Canada his home and has lived and worked in Montreal, in Vancouver, in the interior of British Columbia and in Alberta.

In his early years in Alberta and British Columbia, David was influential in building the thriving communities of local musicians which both provinces enjoy.  His band named Domba (Wolof for the “power of belief”), built on percussion, brass and strings, performed often and widely. He now focuses on musical and cultural education through school residencies, conducting workshops, teaching, performing and crafting his highly-prized professional instruments.

And what a legacy he brings. David’s talent and his love of music shine! He has been privileged to work and play with many singers, instrumentalists and choirs from many places, including:  music schools such as Suzuki, Kodaly, and ORFF;  choirs such as Calgary Girls’ Choir, In the Pink, Juba, Marnie Strom’s Youth Choir (using djembe, shakere and sabar); performing artists such as Linda Tillery, Les Grands Ballets Canadiens, Nouvelle Aire Dance Co, Miroslav Vitrous, Charlie Biddle, Pepper Adams and Oliver Jones; performances such as the Banff Centre’s recent work building an operetta around The Last King of Scotland (with Stephen MacNuff);  international schools in Singapore; Alberta schools and programs such as Strathcona-Tweedsmuir, the Calgary Board of Educations’s “Connections” and many schools from elementary through to secondary grades.