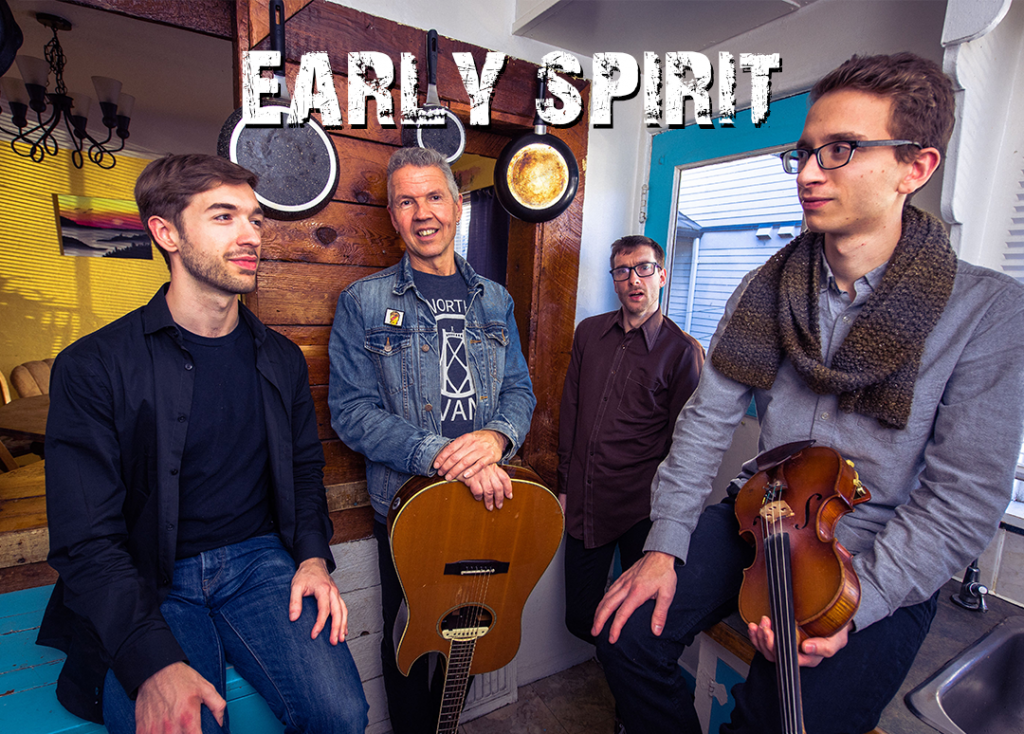 Early Spirit is Will Chernoff (bass), Gabriel Dubreuil (violin), Ben Kelly (drums), and Jay Knutson (guitar). At almost every performance, fans ask “Are you a family band?” But these four sons of Vancouver, BC are related only by music, and they’re proud to release Early Spirit’s first album, Unrelated.

Jay Knutson sings the lead vocal for Early Spirit. Previously, he arranged, performed, and wrote Celtic folk-rock music with John Mann and Geoffrey Kelly in their band Spirit of the West. Later, Jay worked with major Canadian artists including Hart-Rouge and Connie Kaldor. His solo material, a constant throughout his career, draws from jazz and roots music. As a singer-songwriter, Jay “puts the soul back into music, fun back into instruments, and conviction back into lyrics” (The Chronicle Herald , Halifax). He uses wisdom gathered from over 50 album projects to write for and perform with Early Spirit. Few performers in folk music can combine their experience with raw energy like Jay.
The North Shore Celtic Ensemble, a violin youth group that Jay co-founded in 1998, helped Early Spirit come together. Playing drums in this group was a young Ben Kelly, the son of Jay’s Spirit of the West bandmate, Geoffrey Kelly. Ben went on to perform and record with Fish & Bird, an eclectic folk music band from the Southern Gulf Islands, and he continued to lend his talents to touring independent acts. Ben’s musical heroes include the versatile session masters of the 80s, including his favourite drummer, Jeff Porcaro.. His drumming complements every style from children’s music to heartland rock.

Before Ben joined their lineup, Early Spirit began as the Gabriel Dubreuil Trio. Gabriel, a young Franco-Canadian fiddler, attended Berklee College of Music in Boston. He had already worked around North America as a young, in-demand session violinist before spearheading the trio in Vancouver. Gabriel honoured his passion for independent, genre-bending music, and started his own teaching practice and performing act; his talents span classical, folk, and jazz. He writes instrumentals with influences of Darol Anger, Casey Driessen, Jeremy Kittel, and Natalie MacMaster.
Will Chernoff, a local bass player, had been among Canada’s finest young jazz musicians, representing BC at national high-school music festivals. Music allowed him to be both a geek, and an extroverted performer. Crossover talents like Bill Frisell and the Punch Brothers were his gateway into folk. Joining the North Shore Celtic Ensemble introduced him to Jay and, eventually, to Gabriel. Jay mentored Will and performed with him regularly until Gabriel returned to Vancouver.

Gabriel, Jay, and Will formed a trio and self-produced a recording, Back to Back Bay in 2016. With new, original instrumentals and songs, they began performing at music festivals on the west coast, particularly in the Francophone community. Welcoming Ben into the group gave them the rhythmic power to entertain on the big stage, and Early Spirit was born in late 2017.

Banjoist and producer Leonard Podolak joined the band’s team for the Unrelated project. Together, they arranged six songs and four sets of tunes. Two of these songs come from Jay’s time in Spirit of the West, but they would only be recognizable by true fans. “Mists of Crofton”, Early Spirit’s first single, is a progressive arrangement with deep groove and powerful violin leads. Also featured as a single is a brand-new set of tunes called “Reel du Cocotier”, where the band moves from swing jazz influences to dance-heavy reels.

Early Spirit is ready to celebrate Unrelated, an album that spans decades and was created through their unique take on folk music. They invite fans of all ages to remember how much they love music and get dancing!

“This is a hot example of Celtic music and jazz fused together by superb musicians.” – The Celtic Connection

“A delicate balance between electric and acoustic songs,dark and catchy rhythms, soft and the ethereal” -The Ottawa Citizen

“The sound is a unique blend of rock and roll energy, of folk lyrical conventions centered around various facets of Canadian life” – Vancouver Province.