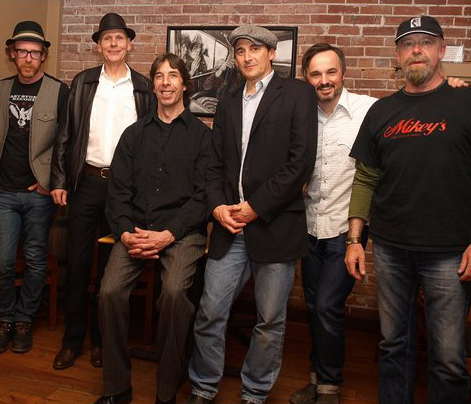 This crew of veteran western Canadian roots music players and out and out characters have a collective resume that boasts success in the blues, country, folk, roots-rock and singer-songwriter scenes over a period of four decades. Drawing on the talents of musicians from Edmonton, Calgary, Bragg Creek and Vancouver, Front Porch has been juggling a number of shows and themes over the past decade with a core cast that is augmented by longtime alumni, depending on the theme of the show.

Since 2012 Front Porch has produced a tribute to The Band called Up On Cripple Creek which has played sold-out dates in soft-seaters and classy cabarets on the prairies while making appearances at festivals like the Vancouver Island Music Festival and the Wild Mountain Music Festival.

The group has cut two albums, a self-titled release and 2015’s Sugar Cube which hit the number one spot on the CKUA Radio Network.

Members of Front Porch have also toured the country with The Gift: A Tribute to the Words and Music of Ian Tyson and participated on the recording of the same name. Look for Front Porch to be front and centre at our 40th Anniversary Celebration of the Last Waltz while pitching in on any number of side stage workshops and sessions during ROOTS&BLUES ’16.