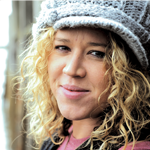 Every once in a while an artist emerges who touches the very soul of an audience.Genevieve Chadwick is such an artist.

She looks like an angel… roars like a lion… and plays guitar like a demon! She’s been likened to the great Janis Joplin… ‘a female John Butler’. In his article at australianstage.com.au, reviewer Lloyd Bradford Syke called her “Australia’s answer to Melissa Etheridge”.

Without doubt, Genevieve is an extraordinary performer who exudes raw energy by the bucket load. She has the power to bring an entire venue to a complete standstill. Her own original brand of Blues and Roots – poignant songs full of rich melodies, sung with a voice that’s confoundingly gravel-like and smooth all at once – has given this singer/songwriter from the NSW South Coast a loyal and ever-growing army of followers.

Genevieve tirelessly toured her popular debut album ‘Riding the Wind, Forgetting Time’, captivating audiences all over Australia and winning her appearances at many major music festivals. She also scored opening slots for some of the country’s top acts and in 2013 won the People’s Choice Award at the Telstra Road to Discovery Finals in Tamworth.

In a breakthrough year, Genevieve was also selected as one of only three Australian artists to become part of the global Playing For Change music project, which in turn saw her play Bluesfest at Byron Bay and and support Joan Armatrading and Ben Caplin on their Australian sideshows.

On stage, she inevitably lives up to her reputation for giving her all. Offstage, her talent is equalled only by her humility. There’s no doubt she’s already made her mark, but that mark is about to get a whole lot bigger.

The future holds great promise and if anyone can deliver on that, it’s Genevieve Chadwick.