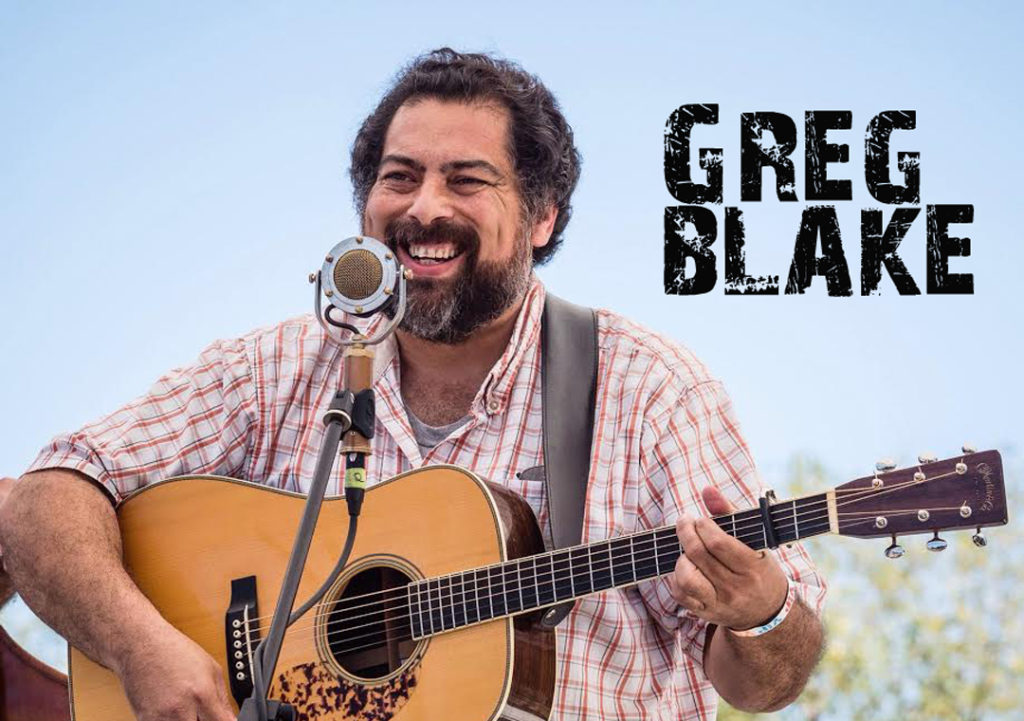 You’ll hear it in his voice immediately … the original strain of Appalachian mountain music that lies at the heart of all great modern bluegrass and country. Greg Blake grew up in the mountains of southwest West Virginia, and when he sings, you can hear a voice that connects to the great old generations of mountain singers, invested with a rich twang and rumbling drawl, and the kind of eerily powerful high tenor cry that first inspired the ‘high, lonesome sound.’

On his new album, Songs of Heart and Home, he’s joined by some of the best bluegrass talents today, not least members of the band he leads as vocalist, Jeff Scroggins and Colorado, plus guests like 3-time IBMA Vocalist of the Year Claire Lynch, K.C. Groves (Uncle Earl), bluegrass icon Laurie Lewis, mandolinist John Reischman, fiddler Blaine Sprouse, bassist Mark Schatz and dobro master Sally Van Meter (who also produced the album). But it’s his voice that rings out above them all, earnestly delivering songs of family, love and life in the hills.

These days he’s traded the low, rolling mountains of his West Virginia homeland for the sky-scraping peaks of Colorado, and he’s moved his lifelong calling as a minister to the full-time bluegrass music scene, but he still keeps his faith close and his family closer. On songs like “Dreaming of a Little Cabin” or “Turn Your Heart Toward Home”, you can hear the gentle guidance of a pastor and a devout family man reflecting on the good path. While bluegrass gospel may be one of Greg Blake’s signature talents, he’s certainly not averse to a little rough-and-tumble country singing, and his new album features a blazing bluegrass version of Johnny Cash’s “Hey Porter” that shows off Blake’s razor-sharp and lightning-fast guitar picking abilities. Drawing from a wide variety of song sources, from Cash to 80s country (Joe Diffie), to Canadian folk (Ian Tyson), to the original source himself, Big Mon, Greg Blake has a far ranging set of influences but a powerful Appalachian base to his music that resets these vocal gems in new ways.

Growing up in West Virginia, Greg Blake was immersed in the sounds of old country, mountain bluegrass, and gospel harmonies from a young age. Moving to Kansas City, he started playing in more and more bands, eventually recording on 12 albums for bands like the Bluegrass Missourians, Mountain Holler, The Harvest Quartet and more. He’s twice been nominated for the SPBGMA’s Traditional Male Vocalist of the Year and five times won the SPBGMA’s Guitarist of the Year, not to mention the Kansas State Flatpicking championship. After moving to Conifer, Colorado, a ‘bedroom community’ nestled in the foothills of the Rocky Mountain Front Range just a few miles southwest of Denver, Greg joined all-star progressive bluegrass band Jeff Scroggins & Colorado as the lead vocalist. With both Jeff and his son Tristan breaking new ground instrumentally on the banjo and mandolin, Greg stepped up to the plate as a guitarist, and crafted the band’s sound around his signature high tenor vocals. They’ve recorded two albums and have a third about to be released.

Now after touring North America and raising a family, he’s poised to come into his own as one of the true Appalachian stars of modern bluegrass. This debut solo album, Songs of Heart and Home, measures Greg Blake spreading his wings as a vocalist and bandleader, crafting genre crossing music and following in the footsteps of his idol, Mac Wiseman, to make music that appeals to Bluegrass, Folk, Country, and Gospel fans alike.

It’s no small thing that Greg Blake was able to gather some of the best musicians and vocalists in bluegrass to join him on his debut solo album. A big man with an even bigger heart, he brings an uplifting joy to the music he knows and loves. Unfettered by genre divisions and unconstrained by tradition, he just follows his heart to find the deep mountain roots of the music, infusing everything he sings with a powerful, soaring spirit.
– Hearth Music