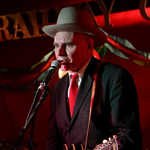 Herald Nix has long been one of the most respected artists in the Canadian underground music scene. Years before people started talking about ‘alt country’, Salmon Arm’s Nix was writing and playing music that drew on very deep roots. He can stand up to the microphone alone with his guitar and, with just a few words, draw you into a new world. Backed by his band, he fills the room with an electric guitar sound so big, you’ll wonder how he gets it all out of so few musical instruments.

There’s a kind of majesty in Nix’s storytelling. With stoical detachment and a weather-beaten, “I’ve-seen-it-all” voice, he can make a three-minute song of disillusionment sound as epic as King Lear. Yet there’s a wonderful simplicity to his songs. The result of several years of honing his craft and hundreds of live performances, they carry no excess baggage. They’re pure, but also deep, and in their depths can be found a wealth of interpretative possibilities.

Then there is Nix’s guitar playing which is so personal that it defies categorization, think Hank Williams or Lefty Frizell with fangs and a distortion pedal. Using fingers and slide together, he evokes bottleneck blues and pedal-steel styles. His use of echo harks back to Carl Perkins and Scotty Moore while his gritty amp tones might easily have been devised by the Memphis and Mississippi transplants who invented Chicago blues. Influences of such artists as Link Wray and Fred McDowell can be detected but still there exists a remarkably roguish unpredictability to his playing.