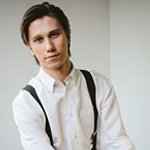 Jesse Mast is an 18 year old singer/songwriter from Salmon Arm BC. He grew up with a passion for music, listening to genres including Celtic, bluegrass, and folk. ‘You could say that music is in my blood… I grew up surrounded by it. My grandma and her siblings used to play in a band together called the Family Five, headed up by my great- grandfather. From a young age they told me stories about the different instruments and songs they would play.’

Over the past couple of years Jesse has been developing his career as a Canadian Country entertainer and has gained recognition as an up and coming artist. He has been featured on the KWKH Louisiana Hayride Radio Show and the Westbank Country Opry Radio Show. He also took first place in the Country 103 Radio Interior Talent Search. Jesse has made appearances in multiple song writers showcases, and has played alongside Canadian artists like Shane Chisholm, Duane Steele, and Alee.

He has opened for and guested with some of Canada’s biggest acts, including Brett Kissel, Joe Burt, Katie Mission, and Andrew Allen. Earlier this year he was presented with three North American Country Music Association International Awards for Songwriter of the Year (for ‘House of Pine’), Male Vocalist of the Year and Male Entertainer of the Year.