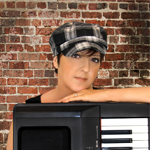 In some ways Roots R&B/Americana singer/songwriter/piano player/guitarist KELLEY HUNT is a rarity and a challenge to the music industry’s penchant for easy artist definitions — a woman who has muscled her way onto the scene on her own terms with an identity steeped in blues/roots/gospel traditions and a refreshing originality. She makes music with its righteous roots intact, that also crosses boundaries, has an open-minded, exploratory attitude and takes on social and political issues. Together with a commanding, passionate stage presence and superior vocal, keyboard and songwriting skills, she has earned the respect of critics and fans across North America and Europe.

Born in Kansas City, Hunt’s love for her craft was ignited listening to early blues, R&B, roots rock, jazz and Gospel  but before that came the sound of her mother singing jazz and blues – her first musical memories – and the influence of her New Orleans Gospel singer grandmother. Reminders of these very traditional influences are evident in Kelley’s live performances and recordings, but the lyrics, soul and passion are all her own. Her career path so far has been a story of fierce independence, incredible will, unassailable ‘cred’ as a blistering live performer and hard-won accomplishment.

On paper, Hunt is an independent act who’s made an impact in the roots world and beyond; a Kansas Music Hall of Famer who’s won over crowds from international blues and jazz gatherings to Austin City Limits Music Festival and Seattle’s Bumbershoot, performed on Prairie Home Companion no less than six times and sold close to 150,000 albums on her own indie label.

But no list of accomplishments could do justice to the bold spirit of what Hunt does, a spirit she’s channeled into Gravity Loves You, her most recent album.  The dozen original songs on the album spin narratives and summon moods that leave no room for timidity.  Though they’re a diverse batch of songs in theme and style, says Hunt, “…they all get around to ‘find the life that’s true to you.  You’re not gonna fall off the end of the earth if you just take a giant leap of faith.  Let the ‘gravity’ that pulls you toward your true self work for you.  Do it.  Like, do it now.’”