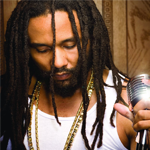 Synonymous with Jamaican royalty, the Marley name is recognized around the world, the legacy of a pioneer of a cultural, political and social revolution. Reggae icon and legend Bob Marley blessed the world with his timeless, brilliant and message filled sound which continues to inspire and influence audiences today. With such a living past, Bob Marley’s conviction and passion for music unintentionally, though perhaps inevitably, was passed to the lives of his offspring, which has allowed the Marley name to remain relevant amongst the hierarchy of contemporary reggae sound.

Born on February 26, 1976, Ky-Mani Marley is the son of Bob Marley and table tennis champion Anita Belnavis.  Ky-Mani is the second youngest of Bob Marley’s eleven children.  While bearing the Marley name, Ky-Mani’s childhood told a different story. Born in Falmouth, Trelawney, Jamaica and settling in Miami, Florida at the age of seven, he was raised in the inner-city in a small two bedroom home along with eight other family members.

Being exposed to a hard edged urban lifestyle, Ky-Mani adopted the attitude that all people are equal – no one is above or beneath him. This attitude has become the motto for the way he lives his life today.  It has guided Marley to success in music, film, television, and literature yet still he remains humble, soft spoken, sincere, loyal, honest and genuine.  These are the makings of Ky-Mani Marley.

Remaining true to his Jamaican culture, Ky-Mani’s fondness for all genres of music influences the work he creates. He is an artist with no limits. Incorporating world music, hip hop, blues, rock, and a grass roots sound into his music; the end product is the pure representation of life for Ky-Mani.  With four studio albums, Billboard chart success, and a Grammy nomination, his musical style transcends cultural and creative boundaries and prohibits him from being categorized as solely a reggae artist. His raw, unadulterated, gruff sound captures the listener and reverberates with the essence of Ky-Mani’s life story.

Relentlessly recording revolutionary new material, his music displays the versatility and fiery-passion he exudes when sharing his voyage through song.  Peace.  One Love.  Unity.  Street Life. These are the makings of Ky-Mani’s music.  Perhaps this is why, when Ky-Mani Marley is not in the studio, he spends his time restoring his roots by giving back—that is, providing opportunities for his Love Over All Foundation (L.O.A.F.).  The foundation’s aim is to inspire and uplift children and youth from third world countries by educating, restoring values, rebuilding schools and supplying the basic necessities for classroom and community.

A man for all seasons, Marley is currently touring worldwide, with the long anticipated album Evolution of a Revolution coming out later this year.