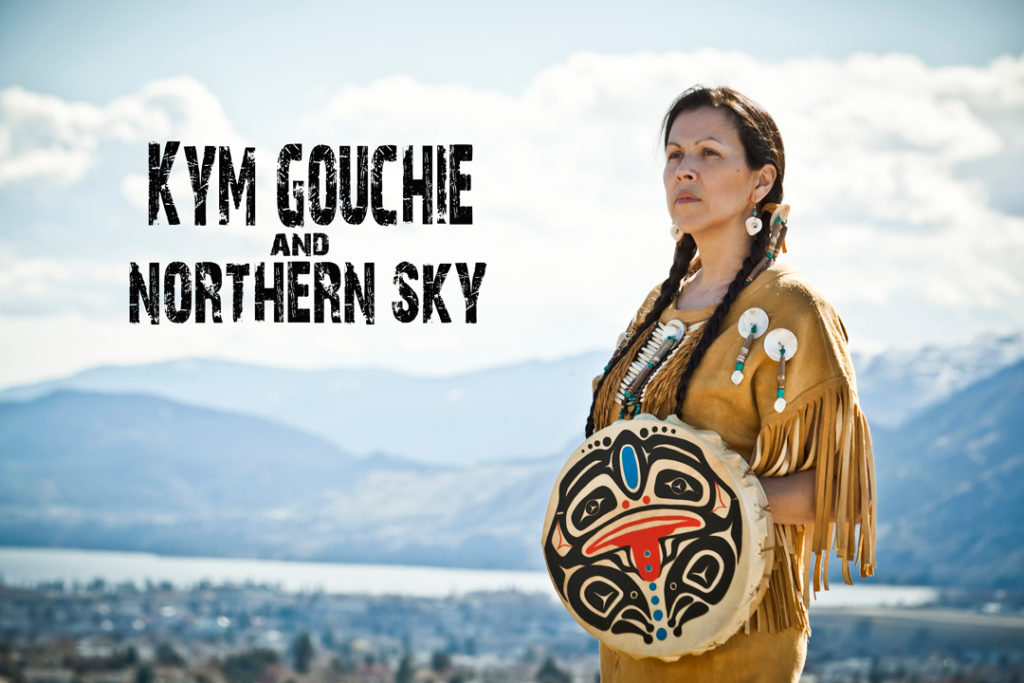 One of Northern BC’s fastest growing recognizable Indigenous Artists, Kym Gouchie is fostering change through her music and art. Her voice can be heard around First Nations and woman’s issues, the Highway of Tears, Red Dress Campaign, using her music for reconciliation, education and awareness.

Kym Gouchie stories are woven together with threads of personal journeys which have taken her from personal tragedy to triumph and a testament to the human spirit.

An artist with a social conscience, Kym has become a favorite among the music festival circuit with her debut album ‘Mountain of Youth’ (2014 release) which is emboldened with poignant, uplifting and inspirational lyrics. Her resonating tones of traditional first nations, folk, and country has captured the hearts from young to old and all walks of life.

In August 2015, her single ‘Sister Rain’ reached #1 on the NCIFM National Aboriginal Top 40 Music Countdown and ‘For The People’ was selected to be included on the Truth & Reconciliation Compilation CD which was created to educate people about the Canadian Residential School experience.

Since the release of her second CD, ‘Northern Shining Star Woman’ in February 2017, Kym has been non-stop performing at Festivals such as ArtsWells;All Thing Art in Wells, BC Midsummer Music Festival in Smithers, BC World Music Festival in West Kelowna, BC, Hay Fever Festival in Grassy Plains and Robson Valley Music Festival in Dunster, BC. In 2015 she became a member of the Kh’astan Drummers in Prince George and is a sought after performer for Traditional Welcoming Ceremonies, School presentations and Cultural Gatherings. Kym also works with the Red Dress Campaign Society in Prince George and has composed the song ‘Cleansing the Highway’ which pays tribute to the murdered and missing women and girls along the Highway of Tears. This powerful song was a collaboration recorded in Toronto with the Dixon Hall Music School & in Prince George at the CFUR Radio Studio and became the final track on her latest album Northern Shining Star Woman.

An inspirational mother of four and Grandmother of nine, Kym is also a respected Elder of the Lheidli T’enneh and an Aboriginal advocate, spokeswoman and member of the Aboriginal School District Elders and Knowledge Keepers Committee in the Prince George region.

To round it all out – Kym is currently writing a one-woman play in collaboration with Michelle Thrush called ‘Her Blood Runs Through My Braids’ an expose in honouring her four Grandmothers and how their lives have taught and inspired her. Kym was raised among musicians. Inspired by her eclectic background and draws on the sometimes harsh realities of searching for her own identity as an Indigenous woman who was no stranger to adversity.  Yet somehow her experiences are translated into lyrics that elevate our hearts.

A warrior of the light, Kym’s inspirational music lifts the soul beyond its fettered state along the quest of creating a better world with compassion, understanding and forgiveness, reminding us that we are all in this together.