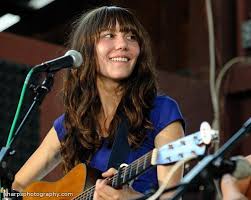 Starting with Nickel Creek (Chris Thile, Sean and Sara Watkins) a number of years ago, there have been a number of remarkably young bluegrass artists making their mark on the bluegrass world in what seems to be the blink of an eye.

Count Molly Tuttle among them, as this gifted American singer, songwriter and guitarist, who is barely out of her teens, has been praised by Bluegrass Today, Flatpicking Guitar Magazine and American Songwriter Magazine. She’s appeared on A Prairie Home Companion, won first place in the Chris Austin Songwriting Contest at Merlefest, played at the renowned Hardly Strictly Bluegrass Festival in San Francisco, while finding time to attend and graduate from the Americana Music Program at the Berklee College of Music in Boston.

Such is her talent on all fronts that she had had more than two million hits on Youtube while receiving raves from established bluegrass veterans around the continent, including mandolin ace John Reischman who will be collaborating with Tuttle and her band at the 2016 edition of Roots and Blues.

The list of credits keeps growing as she’s also recently played the Newport Folk Festival on the east coast of the states and headlined at the Freight and Salvage in Berkeley.

Find out what the growing buzz about Molly Tuttle is all about at ROOTS&BLUES 2016.