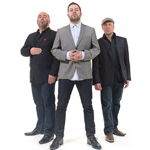 THREE “ORDINARY GUYS” MAKE UP AN EXTRAORDINARY BAND AND CREATE A POWERFUL NEW RECORDING.  MEET STONY PLAIN’S MONKEYJUNK, NOW HITTING ON ALL FREQUENCIES and returning to Roots and Blues for an encore.

If you meet Steve Marriner, Tony D or Matt Sobb on the street you’ll be chatting to three ordinary guys — the sort of folk who’ll stand you a beer at a local pub, or give you a cigarette if they have one.

But between them, they make extraordinary music — a tough-assed hybrid of blues, rock and roll and jam-band grooves that doesn’t quit.  This is music that makes you wanna dance, but has real substance.

The band’s called MonkeyJunk (one word, folks, with a capital J in the middle –  who can forget their standout performance at the 2011 Festival).  And with the late September release of All Frequencies, their second album for Stony Plain Records, the door is opening for the next stage of what is already a remarkably successful career.

This year All Frequencies hit the mark at the Maple Blues Awards, with the band picking up five awards (on six nominations) including Entertainer of the Year, Electric Act of the Year, Recording of the Year, Songwriter(s) of the Year and Harmonica Player of the Year for Steve Marriner.

Now nominated for what would be a second Juno for Best Blues Album of the Year, the band remains humbled by all of the accolades, though as Steve Marriner says, the band has stopped worrying about “…whether what we were doing was ‘bluesy’ enough. We know that whenever — and wherever — the band’s playing the people dig it.  We’re growing and we’re exploring. Every era of the blues has seen influential artists change the soundscape of the music and explore different musical possibilities. It’s our job to try to follow in their footsteps.”