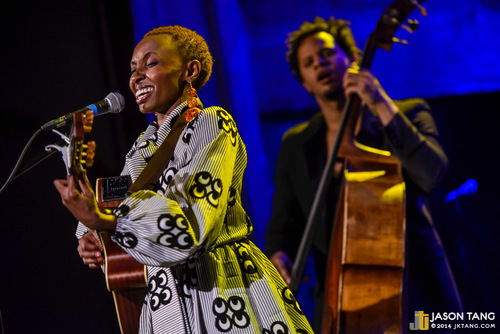 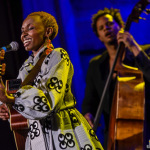 There’s no doubt that there’s a bright future in store for Naomi, especially after her great breakout year in 2013. Named Best Folk Singer in Seattle by alt publication Seattle Weekly and featured on their cover, Naomi became the toast of that great music city.

When you listen to Naomi’s songs, you’ll hear the lifelong influence of two powerful, groundbreaking female songwriters :Miriam Makeba and Tracy Chapman. Makeba became one of the biggest stars on the continent through her socially aware songwriting, something she shared closely with American songwriter Tracy Chapman. Chapman was a voice for social change as well, but Naomi loved her positive idealism, a concept that informs all the songs on Naomi’s album.

Naomi’s making music inspired both by the music she discovered in America and the music she grew up with in Kenya, not a Western conception of how African music should sound. The daughter of a Kijabe pastor, Naomi joined the traveling family band at five years old, spreading the good word through gospel song. This explains the beautiful harmonies on her album, for as she says “In my family everyone sang and everyone knew their part. Harmony was second nature for us.” Larger African concepts also play a part in Naomi’s music, like the Zulu idea of Ubuntu. This concept means “I am because we are,” and it’s a community-based worldview that focuses on caring for each other.