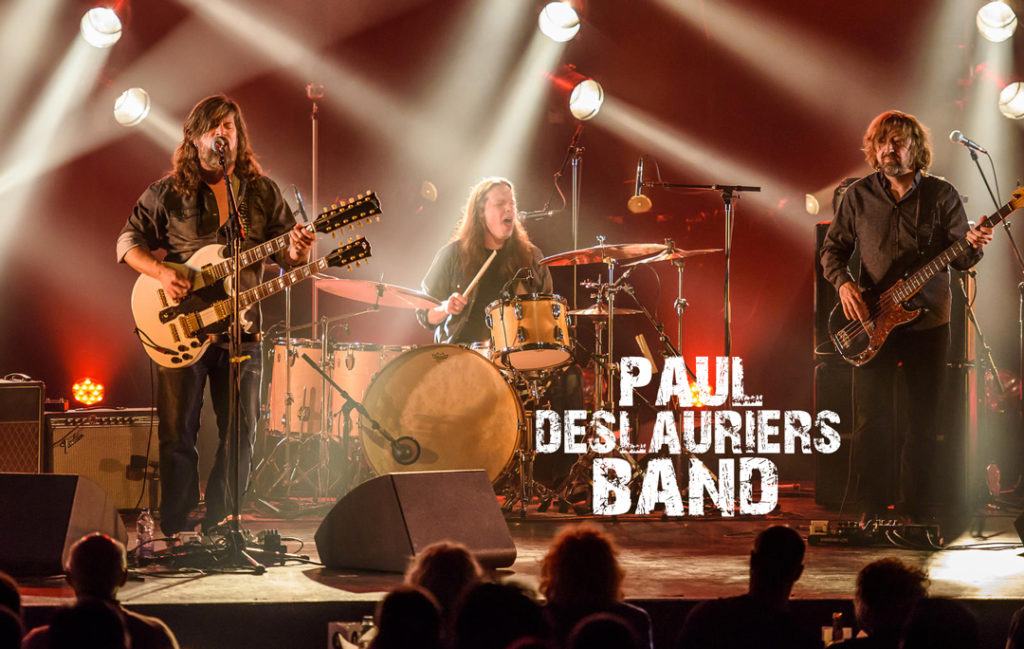 The Paul DesLauriers Band is made up of guitarist and singer Paul DesLauriers and the rhythm section
of Greg Morency on bass and Sam Harrisson on drums. Having worked together on various projects
for nearly 20 years, the band has become bound by friendship and an unshakable mutual respect.
Based on this history and an uncanny musical chemistry, in 2013 they decided to focus all their
energy and talents to develop their distinctive power trio.

These Montreal-based, Canadian Blues veterans blend rock with straight-ahead blues in a way that
echoes the vibe of the great power trios from the 60’s and 70’s, yet they take the music to another
level via modern stylings and an attack that’s free of clichés. The aural texture of their music
changes on a dime from guitar-driven pyrotechnic blazing to a much milder blues boogie with
seamless ease. It’s all wondrously peppered with pleasing funky bass lines and a swamp-blues
backbeat.

Crowned Entertainer of the Year for the second year in a row at the 21st annual Maple Blues Awards
held on January 15th 2018 in Toronto, Canada; in 2017 along with Entertainer of the Year, they also
won the Maple Blues Awards for Electric Act of the Year, Bassist of the Year (Greg
Morency) and Drummer of the Year (Sam Harrisson). In January 2016 the band took 2nd place at
the 32nd International Blues Challenge (IBC), the world’s largest gathering of blues acts, organized
by The Blues Foundation. Held in Memphis Tennessee, they rose to the top to take the runner-up title
in the Band category in a worldwide competition that saw 119 bands competing for a spot on the
podium.

Their most recent release, the aptly titled Relentless (June 2016), is a genuine blues-rock escapade
featuring 10 original new songs encompassing their most original and powerful work to date.
Released to international critical acclaim, the album climbed to the #2 position on the Roots Music
Report radio chart in Canada and to #10 in the USA. They are currently touring Canada, the USA and
Europe in support of the album with notable performances past and present that include the Big
Blues Bender in Las Vegas NV, the Montreal International Jazz Festival, the Tremblant International
Blues Festival, Ottawa BluesFest, White Mountain, NH Boogie N’Blues Festival, Heritage Music Blues
Festival in Wheeling, WV and the Daytona Blues Festival among many others. Also released in Canada
to unanimously excellent reviews, their self-titled 2014 album reached the #1 spot on the iTunes
Canada Blues Chart within a month!

In June 2013 they released “Enter The Gate” with sitar maestro Anwar Khurshid, a unique acoustic
meeting between the Blues and Indian Classical music. The group won the “Best In Festival Award”
after their performance at the Tremblant International Blues Festival in July 2013.
Undeniably part of Canada’s musical elite, all three members are regular nominees and winners at
the Maple Blues Awards and Quebec Lys Blues Awards.