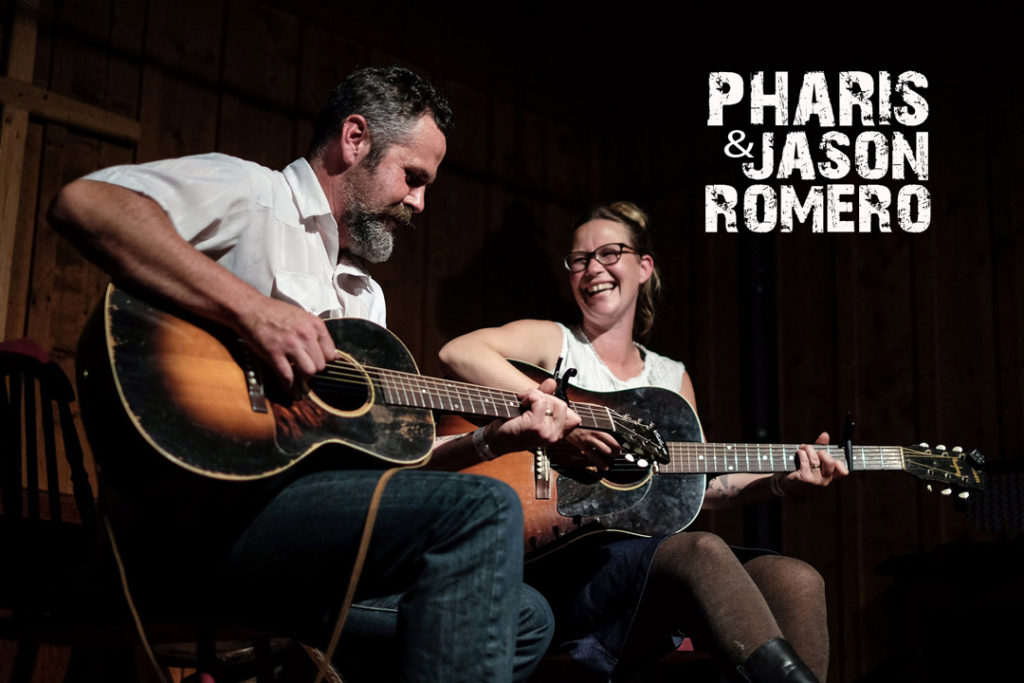 It’s a classic story. A matchmaker, some scratchy old records, a custom banjo and a flyfishing trip all led to to a meeting in 2007 at an old-time fiddle jam. She was living in Victoria, BC and he was living in Arcata, CA. Both had been playing music for decades, and both loved the early stuff. She sent him a copy of the 1928 recording Tupelo Blues from Hoyt Ming & His Pepsteppers, and they married 3 months later. In 2010 they moved their home and the J. Romero Banjo Company to the central British Columbia town of Horsefly (her hometown). Surrounded by wilderness and good people they build banjos and play music new and old, releasing three records as a duo – A Wanderer I’ll Stay, Long Gone Out West Blues, and A Passing Glimpse – and two records with other folks.

Writing songs about ageless characters, hard lives, loss and love, Pharis’ songs have been played on radios around the world. She was called a “historical treasure” by the BC Folklore Society. On stage from a very young age with her family’s country band, classically trained and country schooled, she was a co-founder of the award-winning and innovative roots-folk band Outlaw Social, releasing two celebrated albums from 2005 to 2009, before venturing out musically with Jason.

Jason was a fixture on the Arcata, CA bluegrass and old-time scene before coming to BC, and is deft in banjo styles from early fingerstyle to clawhammer to bluegrass. When not playing banjo, his resophonic and acoustic guitar playing is a distinct texture, melodic and percussive. His singing and his playing has been called both seductive and badass.
In 2008 Jason and Pharis started the Haints Old Time Stringband with fiddler Erynn Marshall and the later addition of mandolinist/guitarist/songwriter Carl Jones. Releasing their debut recording Shout Monah in 2009, SingOut magazine said “This is a very special recording, one that [we]’ll return to time and again. “They play and sing superbly” (fRoots), and Shout Monah was named one of the best banjo releases of 2009 (Banjo Newsletter).

In 2010 Jason and Pharis released an instrumental album of fiddle tunes, Back Up and Push. With nineteen west coast old-time fiddlers and Pharis and Jason’s guitar and banjo back-up, it earned them the accolade “old-time duo of Canada” (Penguin Eggs).

2011 brought the release of their first duo album, A Passing Glimpse. A beautiful collection of songs – originals or lovingly sourced from old recordings – it set the stage for future duet recordings, with plenty of powerful duet singing over acoustic & National guitars, fingerstyle and clawhammer banjo. It won the 2012 Independent Music Award for Americana Album of the Year, hit #1 on the North American Folk DJ playlists, and won a 2012 Canadian Folk Music Award for New/Emerging Artist of the Year.

Their second release as a duo, 2013’s Long Gone Out West Blues, found a new place in their songwriting, picking and closeness as a duet. It was featured on NPR Music’s Favorite Sessions, Utne Magazine’s Monthly Music Sampler, and in Folk Alley’s Hear It First. It also brought a Canadian Folk Music Award for Traditional Singer and a nomination for Traditional Album of the Year, two Western Canadian Music Awards nominations, and an Independent Music Award nomination for Americana Album of the Year.

Their newest release is A Wanderer I’ll Stay. Now raising a family while sustaining on an ever-growing line of custom handmade banjos, Pharis and Jason have carved out new songs – heartbreak to wilderness dwellers, gourd banjo instrumentals to moaning refrains – and put their singularly recognizable stamp on some beautiful covers. With instrumental guests on fiddle, bass, pedal steel and even drums, it was recorded by David-Travers-Smith at their home in Horsefly. Called “sublime” (NPR) and “brilliant” (BBC), it won a Juno Award (Traditional Roots Album) and a Western Canadian Music Award (Songwriter of the Year), and was nominated for an International Folk Music Award (Song of the Year – “A Wanderer I’ll Stay”), and four Canadian Folk Music Awards. The title track was 2015’s #1 most-played song on the Folk-DJ Charts and the album was the #1 most-played on Stingray’s Folk-Roots radio.

Pharis & Jason’s releases continue to attract audiences and radio play globally. Their delight in making music for music’s sake no doubt contributes to the joyful lack of pretense in their albums and performances and to the rapidly-growing fan-base for both.

Performance highlights include several appearances on A Prairie Home Companion, a tour with The Vinyl Cafe, the Winnipeg, Vancouver and Edmonton Folk Music Festivals, Celtic Connections and Pickathon. When not building or performing, they also spend much of their year teaching at music camps and workshops including Voiceworks, BC Bluegrass Workshops, Festival of American Fiddle Tunes, Fiddle Works, 108 Mile Bluegrass Camp, Georgia Straight Guitar Workshop, and others.