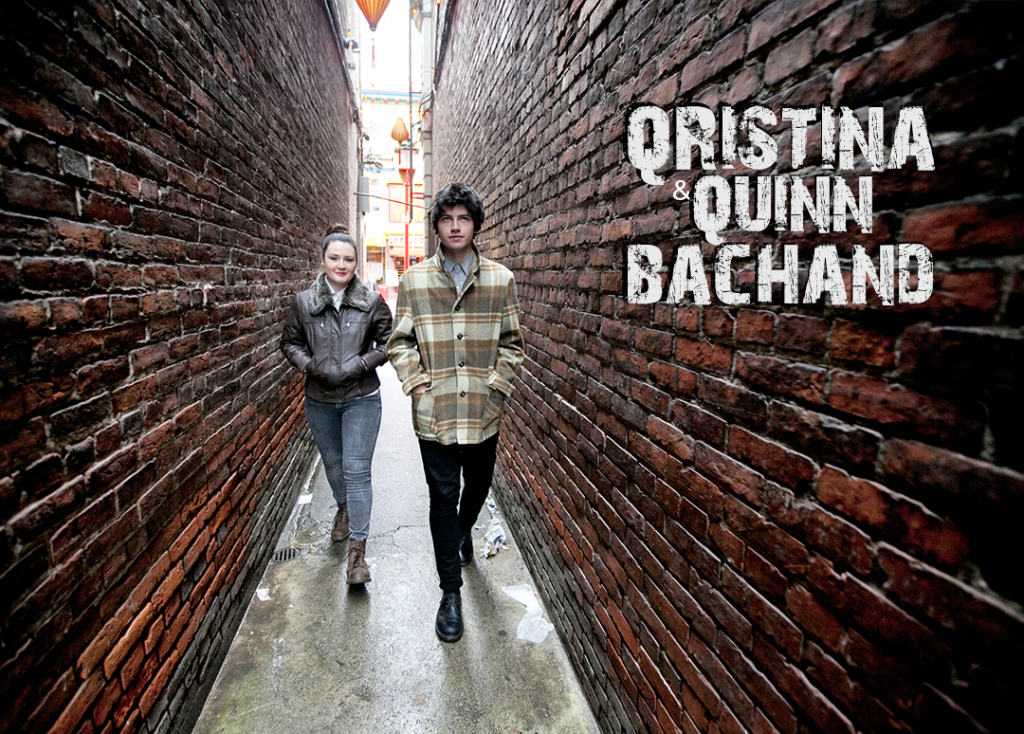 Qristina & Quinn Bachand have proven to be quintessential to Canada’s contribution to the world stage, garnering a mantle-packing collection of awards and recognition that thrust them to the top of the international Celtic music world.  They’ve won two Irish Music Awards, 2010 Top Traditional Group and 2011 Top Duo.  Since 2009 Qristina & Quinn have also received a combined total of 16 nominations at the Canadian Folk Music Awards, the Western Canadian Music Awards and the Vancouver Island Music Awards.

Born on Canada’s West Coast, with its signature embrace of experimentation and improvisation, Qristina & Quinn have developed their own ‘voice’, exploring various musical traditions, fusing styles such as Old-Time, Celtic, Folk and Jazz to create their own distinctive sound. Their music features a hint of grunge, a dash of noir, a healthy sprinkling of Celtic and a dollop of rootsy goodness, engaging contemporary listeners with jaw-dropping effect.    While their performances speak to the heart of traditional roots music, they successfully introduce their own fresh new approach.  They artfully meld heart-swelling, stomp and clap Celtic Roots with progressive Indie Folk, with results that are arresting, provocative, stimulating and thoroughly intoxicating.

??Undoubtedly two of the most outstanding young musicians to emerge from Canada’s West Coast, Qristina and Quinn Bachand have a musical bond that only siblings can share.  With a musical connection reminiscent of other Canadian family groups such as Leahy, The Barra MacNeils and The Rankins, audiences everywhere are quickly falling in love with Qristina & Quinn.  ??

Versatile and sublimely gifted at creating music that is fresh, exciting and fun, they can make a simple tune take on new dimensions. This spirit and skill is showcased perfectly in their two critically acclaimed albums, “Relative Minors” (2008) and “Family” (2011). Their much anticipated new album “Little Hinges”, was released in 2015, ranking high on folk music charts nationally and internationally.??

Qristina and Quinn performed at major Folk and Celtic festivals across Canada, the United States and Europe, and have been featured on national and international print, radio and television media.