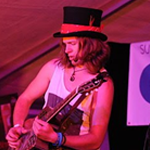 Australian singer/songwriter Richard Perso is a multi-instrumentalist who single-handedly redefines the phrase “one-man band.”  Sitting on a stomp box with a drum pedal under his left foot and a tambourine under his right, Perso strums on one of his many guitars, and hollers like a 1930’s bluesman in his low-range bluesy voice. All of Perso’s guitars have two pick-ups, one of which runs clean acoustic directly to the desk. The second from a P90 under the strings runs into an effects pedal board that he controls with his feet when he is not busy controlling the kick drum or tambourine. Additionally, all of Perso’s music is created live on stage without any backing tracks. On top of all this intense musical action, his trademark is adding in some notes played on one of his three didgeridoos.

With over 90 different festivals around Australia and still just 21 years old, this hardworking young musician is certainly blazing a hot trail through the countries vibrant industry. Outside of the hectic festival season, Richard Perso is playing shows in different venues all over the country. While he doesn’t seem to have enough arms, legs or lungs to pull off such a physically demanding performance, that doesn’t stop this multi-tasking male from playing 3 didgeridoos, driving a weapons cache of 4 over driven acoustic guitars, somehow managing to replace the roll of a drummer with little more than his 2 feet and singing with a voice that sits somewhere between Barry White and Eddie Vedder.

In the November and December of 2009, after a massive start to the festival season, Richard recorded his debut album in New York and returned in May of 2010 to complete a 6 week tour of the North-East of the U.S.A and the South-East of Canada. Perso has a developed sound that blends Australian cultural heritage with blues, roots, rock and folk. It’s quite an achievement for someone who picked up the guitar at the age of 13 and started playing by the age of 15. Just back from recording his second album in New York in September 2012 and 2 tours for Canada in February and again in July 2013 the world never stops for a musician describing his life as “Living the Dream”.