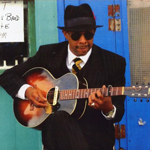 The Delta is calling…. Come to the crossroads…. Rocky Lawrence heard that call when he put down his electric guitar, picked up his acoustic and started the odyssey into the songs, music and life of the founding father of Rock & Roll, Mr. Robert Johnson.

Rocky Lawrence had already made a reputation for himself as a brilliant electric blues guitarist on the East Coast and in the Midwest. A student of Muddy Waters, Hubert Sumlin and Johnny “Clyde” Copeland, Lawrence was no stranger to the blues scene. At the time of his musical rebirth, his band The Rocky Lawrence Project, was one of the top Blues bands in the Northeast.

For three years, fifteen hours a day, seven days a week, Rocky learned and relearned every note, every tuning, every vocal inflection of the fabled 29 songs. At times he almost gave up out of frustration. The songs had to be exact. They had to sound perfect. This was not Rocky’s interpretation of the Johnson songbook that so many others had tried before him. These were Robert’s songs played and sung as if Robert was alive today sitting on a stool at a Mississippi roadhouse.

After this time Lawrence emerged with the songs and soul of Robert Johnson. To start his task of educating the masses, Rocky played two shows at the Riverfront Blues Festival in Peoria, IL. He stepped on stage; suit, hat and Gibson in hand. When Rocky opened with “Steady Rollin Man” the festival erupted and for the next 70 minutes, thousands of people were swept into the voodoo. The spirit of Robert Johnson had taken over.

Rocky’s first CD, “The Songs Of Robert Johnson As Performed By Rocky Lawrence”, was recorded in April of 1999 at Highland Grounds in Hollywood, California. The 12 songs featured on the record are bright, clear recreations of the material. This is what Robert would of sounded like had he been recorded today.

Mr. Lawrence currently tours the country educating University students on the historical significance of the Robert Johnson songbook as it relates to the history of popular music worldwide. Using Robert Johnson as the starting point, Mr. Lawrence traces the family tree of music through its triumphant climb over the last 70 years, and then drives the point home with a 60 minute performance that truly says it all.