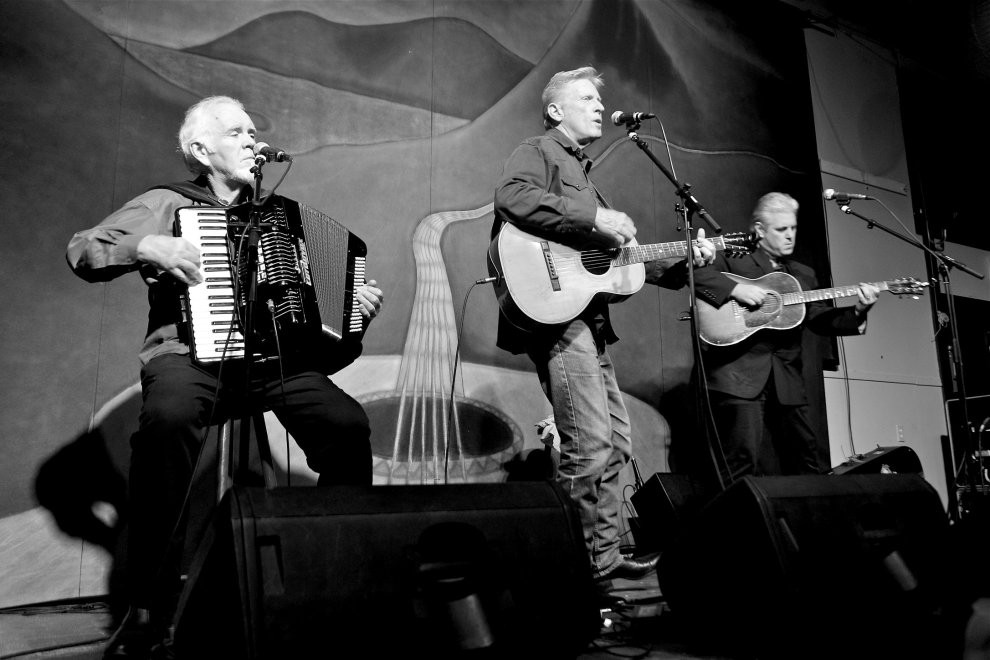 Held together by equal measures of heartbreak and hope, and featuring performances from some of Canada’s most accomplished instrumentalists, Russell deCarle’s new album Under the Big Big Sky plays like the soundtrack to a vintage film. A fluent mix of blues, jazz and R&B tinged western swing that pays homage to some of Russell deCarle’s all-time favourite artists while remaining simultaneously fresh and familiar.

As lead vocalist and bassist of iconic Canadian country roots band Prairie Oyster, deCarle is no stranger to awards and accolades. Over their career the 2008 CCMA Hall of Honour inductees have racked up an impressive list of JUNO and Canadian Country Music Awards, gold and platinum selling records and number one singles. As a songwriter deCarle has also been honoured with two SOCAN Song of the Year Awards. Once in 1994, for Prairie Oyster’s first number one single ‘Such A Lonely One’, and then again in 2008 for ‘One Way Track’, his co-write with Canadian folk legend, Willie P. Bennett.

For some artists the urge to make a solo record asserts itself almost as soon as they start to gain attention as part of a successful band – sometimes even before they, or their audience, truly know who they are. Not so for deCarle. “For decades people have been asking for a solo record,” he says, “but I never thought I was ready and the band always satisfied the musical part of my life.”

What finally got him fired up enough to strike out on his own in the studio was spending some quality time alone with his acoustic guitar. Although he’d initially intended to weight Under the Big Big Sky more heavily in favour of covers than original material, the more he played and wrote, the more he found himself falling naturally into a style that marked a definite, if unintentional, departure from his past work.  When it became clear that the balance of the record would feature his own material, deCarle approached longtime friend, pianist/arranger/producer John Sheard (The Guess Who, Dan Hill) and asked him to take a listen. “We’d wanted to do a project together for years. He’s absolutely one of my favourite musicians in the world and musically we share a lot of things.”

After Sheard signed on to produce the record, deCarle enlisted the talents of another old friend, engineer L. Stu Young (Prince, Ronnie Hawkins, Guns n’ Roses, David Wilcox), who assisted on Prairie Oyster’s 1991 breakthrough record Everybody Knows and mixed their most recent release, 2006’s One Kiss.  With Young manning the board and Sheard producing and playing piano and vibes, the next step, deCarle says, was putting together a wish list of players to join them in the studio. Among them, guitarist Steve Briggs, string bassist George Koller and drummers, Mark Kelso and Al Cross, as well as an all-star cast of guests including: bassist Russ Boswell, fiddler Drew Jurecka, percussionist John Adames and B3 virtuoso Denis Keldie; guitarists Kevin Breit, Amos Garrett, David Wilcox and Prairie Oyster bandmate, Keith Glass; vocalists Amoy and Ciceal Levy, Amanda Walther and Sheila Carabine of Dala and Blue Rodeo’s Jim Cuddy; and a horn section featuring deCarle’s old friend and musical compadre Chris Whiteley on cornet, Gord Myers on trombone and Colleen Allen on tenor and baritone sax.

“I’m honoured that everybody I wanted on the record ended up on it. They really dug deep and did an incredible job.” But assembling this ‘fantasy camp’ of players wasn’t about cramming as many talents on each track as possible, deCarle stresses. It was about complimenting the songs with performances by people he believed would make a personal connection with his songs; the same kind of connection he hopes his audience will make. “For people to be emotionally invested in this, to be touched in some way, that would be the best thing that could happen. That’s why I made the record.”

As much as Under the Big Big Sky may represent a new beginning for deCarle, it’s not a conscious effort to shake off the label of ‘country singer’, but a natural extension of his talents as both a songwriter and interpreter. “I’ve always thought of myself as a singer, not just a country singer. I’m a music lover first and foremost – a product of all the stuff I’ve ever listened to – and my tastes are very broad. To me this is a torchy, bluesy record more than anything else. It’s certainly a product of where I came from musically.”

Just exactly where that is, however, isn’t easy to pin down, and nor should it be. The songs and the subjects deCarle writes about defy being crammed into some fabricated musical zip code for the sake of convenience. “Growing up when I did, radio wasn’t homogenized. I’m pretty sure that the Beatles ‘Ticket To Ride’ and ‘Tiger By the Tail’ by Buck Owens were on the pop charts at the same time, and I’m sure there was a Frank Sinatra song on that same chart.”

Like the soundtrack deCarle grew up with, Under the Big Big Sky covers a lot of ground stylistically. From the sweet soulful blues of ‘Can’t Find the Song in My Heart’, to melancholy ballads like opener, ‘East of the Sun, West of the Moon’ by Robert M. David, to unabashedly upbeat tunes like ‘Girl With the Golden Hair’ that are as reminiscent of old time rock and roll as they are of the music of classic crooners like Dean Martin. And although the record defies easy classification, it’s perfectly clear about the fact that deCarle can find inspiration for his songs just about anywhere; from the big, big Saskatchewan sky he references on the album’s title track, to the ‘Fingernail Moon’ hanging above his own backyard in rural Ontario, to the sad songs and ballads he’s loved since first hearing them on the airwaves as a teenager.

“I could sing sad songs and ballads all night. It’s true, man. I kind of live at 72 beats per minute. Emotionally I think I’ve always been affected by the bluesy side of life; that’s always been what stirs it up for me.” Still, even on heartbreakers like his cover of the Cindy Walker classic, ‘Goin’ Away Party’, or his own ‘Blues for Christmas’ and ‘Don’t Ask The Question’, deCarle possesses an uncanny ability to weave a little bit of hope into every line he sings.

The result is a remarkably eclectic, but entirely cohesive record. Under the Big Big Sky is more than just a confident, compelling exploration of deCarle’s singular voice as a songwriter. It’s an unflinching reflection of where he lives musically and literally, a celebration of the music and musicians who began to influence him long before he began his career forty years ago and a gathering of his closest and dearest musical friends.