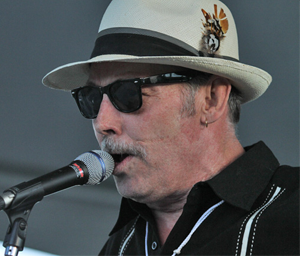 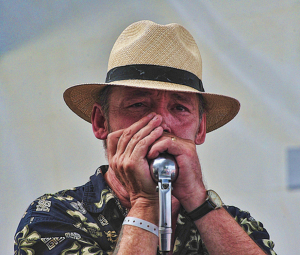 Born December 6, 1953, North Battleford, Saskatchewan, Canada. Sherman’s natural ear for music began developing at an early age. There were many musical nights of singing and dancing at the Doucette’s home when he was a young boy. Family, friends and neighbours would come to join in the fun. His father played the fiddle and the banjo, his brother played the guitar and his grandfather played the harmonica. His mother, sisters and aunts all sang and danced.

Sherman left home at fifteen with a harmonica and a twenty dollar bill in his pocket bound for the west coast to Vancouver, British Columbia.  It was there that he discovered the Chicago blues style on an album featuring Muddy Waters, Junior Wells and James Cotton.  He soon began singing and playing in a series of local blues and rock bands.  By the age of seventeen, he had developed a style of playing greatly influenced by the late great Paul Butterfield.

It wasn’t long before he was performing with the best bands in Vancouver.  On numerous occasions he had the great privilege of sharing the stage with such greats as legendary players as John Lee Hooker, Albert Collins, Sony Land Slim, Pinetop Perkins, Jim Byrnes and Long John Baldry.

In 1977, he amazingly survived a massive explosion in a lumber mill which left him in the hospital for six months recovering from burns to over 50% of his body.  Sherman really earned the name “Tank” after this fight for life.  Now more determined than ever, he embraced his true calling and began focusing all of his time and energy on his music.

Three years later, Tank formed his own blues band, “Incognito”.  The band was at the forefront of the Vancouver music scene.  They released three independent CD recordings toured extensively across Canada.  Sherman also began making guest appearances with other groups, composing and recording jingles in the recording studio, and collecting harmonicas.