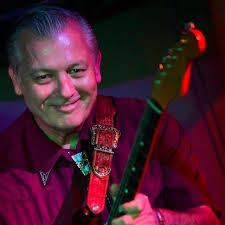 This first-rate blues artist has been turning the heads of blues fans in Canada for thirty years now since he first broke into the Vancouver scene in the mid-eighties. When it comes to tasty west coast blues guitar playing Kozak’s name is at the top of the list in this nation, just ask greats like Duke Robillard and James Harman who have shared the stage with this gifted bandleader, instrumentalist, writer and singer.

Gaining national recognition in 2012 Steve Kozak was nominated by industry professionals from across Canada and won a prestigious Maple Blues Award for New Artist or Group of the Year.

Bruce Iglauer, the head of the prestigious Alligator records in Chicago, said of Kozak’s Lookin’ At Lucky release, that, “it is a well-crafted album, performed with taste and subtlety,” confirming the arrival of this artist.

Salmon Arm ROOTS&BLUES fans are going to be soaked in the sounds of the Best of B.C. Blues and expect the sparks to keep flying when the jammin’ starts on the CBC Blues stage all weekend long.