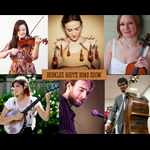 The Berklee Roots Road Show features some of the finest young players from the American Roots Music Program at Berklee College of Music. Serena Eades (BC), Jenna Moynihan (NY) &Adrianna Ciccone (ON) on fiddle, along with Allison DeGroot (MB) on banjo, Nathaniel Sabat(NY) on bass & Neil Pearlman (ME) on piano explore the rich traditional music of Canada, America, Scotland, Ireland & beyond. Together, their insatiable energy embodies the vibrance &relevance of North America’s thriving traditional music community. The artistic director for the American Roots Music Program is Matt Glaser, who served as chair of Berklee’s String Department for 28 years.

Serena Eades has been playing the violin for most of her life. While completing her first B.Mus. at Brandon University in classical violin she became seriously interested in Cape Breton fiddle music which became the gateway genre to her exploring many fiddle traditions and world music. Serena completed a second B.Mus. at the Berklee College of Music in May 2014 and released the debut album with her band Sostenuto in July 2014. She was a founding member of CFMA & WCMA nominated string band The Rakish Angles and is an active member of the Boston based bands Beat Circus and The Confessions.

Jenna Moynihan is a young fiddler on the acoustic music scene, known for her unique and distinct voice on the fiddle. Jenna received a scholarship to attend Berklee College of Music in 2009 where she studied with Darol Anger, Matt Glaser, Bruce Molsky, and Mark Simos. During her years at Berklee, Jenna received the Fletcher Bright Award and the American Roots Music Award, both given annually to an outstanding fiddler. She graduated with honors from Berklee in2013 with a degree in Violin Performance and a minor in American Roots Music. She has performed in the US, Canada, France, and Scotland with various groups including Folk Arts Quartet, Atlantic Seaway, Darol Anger’s Republic of String’s, Bonnie Loch Fiddlers & more

Adrianna Ciccone’s style, while rooted in the Ottawa Valley & Quebecois fiddle tradition, continues to be inspired by the many different regional fiddles styles of Canada and the world, including CapeBreton, Appalachian, Irish, Scottish, Scandinavian & Italian music. Adrianna’s desire to explore new musical languages is reflected in her compositions and arrangements which draw from traditions of the past while forging a unique musical identity. She is a Maritime Open Fiddle Champion, and an active fiddle & step dance instructor, both in Boston and over Skype.

Allison DeGroot combines love and passion for old-time music, technical skill and a creative approach to the banjo, creating her own sound – unique and full of personality. In 2008, Allison founded the Canadian country quartet Oh My Darling, which has played all over the world. Although firmly rooted in old-time and traditional music, Allison has shown her ability to collaborate and create outside this genre. Allison is currently attending Berklee College of Music after receiving the Slaight Family Scholarship in 2012, and has been involved in the Boston acoustic music scene since moving to the city.

Nathaniel Sabat is a  graduate of the voice program at New York City’s renowned LaGuardia High School, his musical roots are in choral singing. However, he started playing bass just before he began at LaGuardia, and, years later, was accepted to the Berklee College of Music as an upright bass principal. There, he has made it a goal to delve into the thriving Boston acoustic music scene, inside and outside of Berklee. To date, he has performed, worked and studied with artists such as Kronos Quartet, The NewYork Pops, Eugene Friesen and Bruce Molsky.

Neil Pearlman is recognized in many Celtic music circles for his unique approach to the piano. Rooted in traditional Cape Breton piano styles, Neil brings in ideas from many other genres and the result is an exciting new sound that remains true to its traditional roots. Some highlights of Neil’s career so far have been performances at Carnegie Hall & The Iron Horse, and teaching at Alasdair Fraser’s Sierra Fiddle Camp.