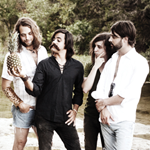 The Bright Light Social Hour is an American rock band from Austin, Texas. Born out of a university art-rock collective, the band first gained attention in Austin from their incendiary live performances and innovative vision of rock and roll. Melding southern rock, hard dance, psychedelic blues, and deep soul, their debut full-length album led to heightening critical acclaim, national touring, and a rare sweep of six awards at the SXSW 2011 Austin Music Awards, including Band of the Year, Album of the Year, and Song of the Year.

Recorded in five studios around Austin during summer 2010, their self-titled debut is founded on sun-drenched optimism, raucous youth, and an innovative brew of American music.  Producer Danny Reisch of Good Danny’s utilized the best elements of vintage and modern recording to achieve a sound both forward-looking and evocative of 1970s hi-fi.  The first track, “Shanty,” pairs southern rock with hard disco, featuring the searing slide licks of guitarist Curtis Roush.  Following the lean, exuberant stomp of “Bare Hands Bare Feet,” the band settles into the dark psychedelic funk of “La Piedra De La Iguana,” led by keyboardist A.J. Vincent’s dusky vocal and Farfisa organ work.  Throughout the middle of the record, the solemn rhythm and blues of “Detroit” is juxtaposed with “Back And Forth,” a four-on-the-floor disco-funk romp.  On “Garden Of The Gods,” the album’s penultimate 10-minute epic, the band evolves from stately ballroom Americana to an expansive, ensemble anthem, conjuring up their limber and unrelenting live sets.  The fiery “Rhubarb Jam” closes out the record, featuring the agile, booming funk of bassist Jack O’Brien and drummer Joseph Mirasole.

Following their album release, The Bright Light Social Hour have embarked on a heavy touring rotation, playing over two hundred shows throughout the United States, Canada, and Mexico.  They have performed in front of thousands of new fans, most notably at SXSW 2012, Wakarusa Festival and opening for Aerosmith at the Plains of Abraham in Quebec City.  Chronicling their adventures, the band has released a series of self-produced tour documentaries depicting their life on the road.

The Bright Light Social Hour is currently writing new material for a second full-length album with plans to return to the studio this year.