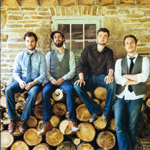 The Slocan Ramblers are Canada’s young bluegrass band to watch. Rooted in the tradition, fearlessly creative, and possessing a bold, dynamic sound, The Slocan Ramblers have quickly become a leading light of Canada’s roots music scene, built on their reputation for energetic live shows, impeccable musicianship and their uncanny ability to convert anyone within earshot into a lifelong fan.

With their debut album “Shaking Down the Acorns” receiving wide acclaim (Sing Out! Magazine, Huffington Post etc…) a sophomore album slated for release in July 2015, and accolades from none other than CBC’s Don Cherry, this fearless four piece is sure to keep garnering attention far beyond the traditional bluegrass fan-base.