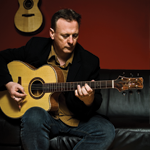 Few guitarists can present Celtic music with the gusto and nuance they possess when played on fiddles or bagpipes. Tony McManus is one of those few.” – Acoustic Guitar Magazine

Conjuring a unique but universal language from that most ubiquitous of instruments, the acoustic guitar, Tony McManus has both extended and transcended the parameters of contemporary Celtic music. Ranked by peers and predecessors alike alongside the guitar world’s all-time greats, his fiendishly dexterous, dazzlingly original playing draws on traditions from the entire Celtic diaspora – Scotland, Ireland, Brittany, Galicia, Asturias, Cape Breton, Quebec – along with still further-ranging flavours, such as jazz and east European music. Long applauded for his uncanny ability to transpose the delicate, complex ornamentation characteristic of traditional bagpipe or fiddle tunes – even the phrasing of a Gaelic song – onto his own six strings, McManus is increasingly being acknowledged also as a pioneering figure in bridging the realms of Celtic music and other guitar genres.

Born in 1965 in Paisley, near Glasgow, his surname the legacy of an Irish grandfather, McManus was introduced to traditional music via the family record collection. Having first tried his hand at the fiddle, whistle and mandolin, he took up the guitar aged ten, although subsequent academic inclinations got him halfway through a PhD in maths before the music won out. After rapidly making his name as an unusually fluent and sensitive accompanist, he took the solo plunge with a triumphant main-stage debut on the final night of Glasgow’s inaugural Celtic Connections festival in 1994, supporting Capercaillie in front of a 2500-strong crowd.

Since then, McManus’s ascent into Celtic music’s international premier league has been simply unstoppable. His first, self-titled album was released in 1996, a formidably accomplished calling-card that earned widespread critical acclaim. Its mainly Scottish and Irish material was rounded off with a taste of eclecticism to come, an arrangement of Louis Armstrong’s Wonderful World that remains one of his most often-requested numbers. Jazz-tinged and improvised stylings were boldly in evidence on 1998’s Pourquoi Quebec?, recorded in Quebec with leading Breton and French-Canadian musicians Alain Genty (fretless bass) and Denis Frechette (piano).

Abetted by an increasingly crowded and globe-trotting live schedule, the album underlined McManus’s growing reputation as a truly prodigious talent, equipped by his deep-rooted grounding in traditional music to articulate its idioms and nuances with rare empathy, while seamlessly incorporating influences from further afield. His skills are also in constant demand by fellow musicians. To date, he has featured on over 50 albums by other artists, including Kate Rusby, Alison Brown, William Jackson, Brian McNeill, Liz Doherty, Colin Reid and Catriona Macdonald, in addition to innumerable live guest appearances. Other current collaborations include his celebrated partnership with master Scottish fiddler Alasdair Fraser – as captured on their breathtaking 1999 album, Return To Kintail – and duo or trio work with the aforementioned Alain Genty, and Breton guitarist Soig Siberil.

Admiration for McManus’s intricately concocted, precisely honed style, however, extends far outwith the Celtic domain. He remains the only non-classical player to be invited three years running to the Dundee International Guitar Festival, from 1997-99, while the Royal Scottish Academy of Music and Drama has enlisted his skills to host seminars for their classical guitar students. Jazz virtuoso Martin Taylor booked him for the inaugural Kirkmichael International Guitar Festival in 1999, while more recently he has performed at the Bogota Guitar Festival in Colombia (directed by Cuban composer Leo Brouwer and Urugyan guitarist Eduardo Fernández) and the Chet Atkins Convention in Nashville. He has also released two highly-praised instructional videos on Stefan Grossman’s world-renowned Guitar Workshop series, with hands-on teaching, also assuming an increasingly important place in his schedule. 2002 will find Tony teaching at both the Fingerstyle and Flatpicking weeks of Steve Kaufman’s Acoustic Camps in Knoxville, Tennessee.