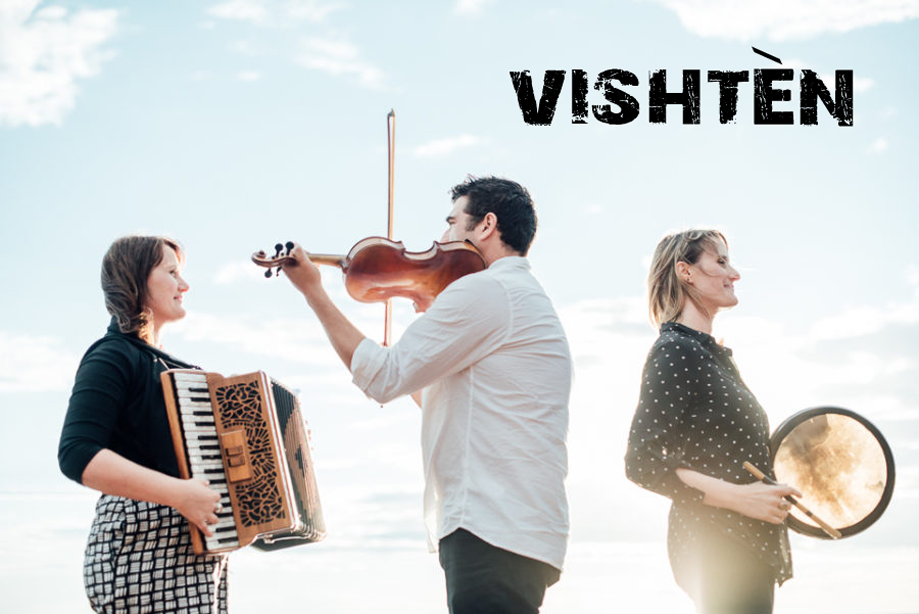 For over a decade, the Acadian trio Vishtèn has dazzled audiences with its fiery blend of traditional French songs and original instrumentals that fuse Celtic and Acadian genres with a modern rock sensibility and indie-folk influences. Lauded as “traditional but fiercely up-to-the- moment” (Penguin Eggs), this band from Canada’s east coast has been recognized as an ambassador of Francophone culture around the world.

The trio comprises multi-instrumentalists Emmanuelle and Pastelle LeBlanc from the Evangeline Region of Prince Edward Island, and Magdalen Islands’ native, Pascal Miousse. Cradled in the Gulf of Saint Lawrence, in the North Atlantic Ocean, Prince Edward Island is home to a small but thriving a Francophone Acadian community with a rich tradition of song and instrumental music. Nearby, the even smaller archipelago of the Magdalen Islands (les Îles de la Madeleine) is predominantly Francophone, recognized for its distinctive French dialect, songs and unique fiddling style. All three members of Vishtèn were raised in homes in which traditional music, percussive dance and kitchen parties were part of everyday life. Together, they pay homage to their traditions and to the historic and strong musical connections between their two island Acadian communities.

From their traditional roots, these three “high voltage musicians” (Le Guéret, France) have crafted a unique brand of neo-traditional music that combines extensive archival research, original compositions, traditional French Acadian songs and virtuosic instrumentals. The infectious rhythms of tapping feet and lilting mouth music blend seamlessly with the fiddle, guitar, accordion, octave mandolin, whistles, piano, bodhrán and jaw harp to offer a musical experience that illustrates their wide sense of the world and breathes new energy and beauty into traditional sounds. Vishtèn’s energetic shows have been described as “Buckwheat Zydeco meets the Irish” (Pittsburgh News) and their innovative blend of old and new has been acclaimed as “[wrapping] up those musical traditions in a bright wrapper that has the heft of tradition but the exuberance of pop” (SingOut!).

In addition to their work with Vishtèn, Pastelle, Emmanuelle and Pascal are prolific composers and accomplished solo artists. Their original tunes and musical contributions can be heard on numerous releases by fellow trad and folk musicians. The band has received four East Coast Music Awards, including “Roots/Traditional Group Recording of the Year” for Terre Rouge (2016), four MusicPEI Awards and Québec’s Édith Butler Award in recognition of their contributions to la Francophonie Canadienne.

One of the most respected bands in the international folk music scene, Vishtèn tours extensively throughout North America, Europe and Australia. The band has performed thousands of shows at international events and venues, including the 2010 Vancouver Winter Olympics (CA), Philadelphia Folk Festival (US), New Orleans Jazz Festival (US), Festival Interceltique de Lorient (FR), Woodford Folk Festival (AUS), Shetland Folk Festival (SCO) and Temple Bar Trad Festival (IRE), among others. As they travel, members of Vishtèn share their pride in their Acadian heritage and deep knowledge of their respective traditions. Known as inspirational teachers, they offer workshops around the world and are regular instructors at several fiddle camps in North America.
Awards