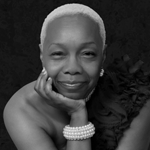 Zakiya Hooker is quite familiar with the blues. You could even say she had a front-row seat to view the best the genre had to offer, right in her own living room. Her dad was the renowned blues giant John Lee Hooker. To be the daughter of a Living Legend is a major obstacle.  To choose to follow in his footsteps is a major undertaking. But rather than relying on her father, Zakiya has pursued life — and music — on her own terms, overcoming personal tragedy and skepticism along the way.   But you know what they say, “the fruit never falls too far from the tree”.  This certainly rings true with Zakiya and she carries her father’s seminal blues torch confidently into the future.

She is a versatile vocalist and a fantastic performer putting on a witty, entertaining show with her band. In 1991 Zakiya made her first public appearance with her father. Since then Zakiya has gone on to perform with Etta James, John Hammond, Taj Mahal, and Charlie Musselwhite. By 1993 Zakiya had released her debut, ‘Another Generation of the Blues.’  1997’s “Flavors of the Blues” came next illustrating Zakiya’s supple blues and smooth, jazz-inflected style. 2001 brought an Indie live release ‘Colors of the Blues’ recorded in Buenos Aires, Argentina.  In 2009, ‘Keeping it Real,’ produced by her husband Ollan C. Bell, was released on their independent label, Boogie With The Hook Records.

Chris James aka Ollan C. Bell may be best known as one of the founding members of the 60’s R&B band, The Natural Four but his talents don’t stop there. During the 70’s Chris performed with artists such as Earth Wind and Fire, The Temptations, Kool and the Gang, the Isley Brothers and Curtis Mayfield. With more than 200 songs on various albums throughout the world, Chris has an impressive discography. He demonstrates the technique, control and vocal range needed to journey into all genres of music.

He’s used his extensive talents to train and produce singers from Paris, Japan, England, South America and the US including Zakiya Hooker, whom he met in 1987.He has produced all four of Zakiya’s albums, and   in 2002 Chris produced the final John Lee Hooker CD “Face to Face”.  Chris is also the President and Co-Owner of the John Lee Hooker Boom Boom Recording Studio in Douglasville, Georgia.