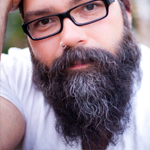 In a complicated world, Cam Penner finds beauty in simplicity, with an honest, spare approach to folk music that is refreshing in an age filled with so much insincerity and irony. Singing uncompromising songs about redemption and truth, Penner is a voice for the disenfranchised, a storyteller for those who never reach their destination. Penner’s fiercely personal lyrics are complemented by a gentle acoustic guitar style, and the defiant heroes of his songs are weary, but they are never defeated.

Penner has described his philosophical outlook and songwriting muse: “Sometimes I feel the thousands of souls I’ve listened to are people living inside of me, telling their tales.” Agreed. When listening to Penners songs you can hear the struggle, the hope, the yearning to be better. “I’ve never really written topical songs, I usually write about the emotional struggle, the pull between what’s right and wrong.”

On To Build a Fire, his new album coming out this year, there are moments that will surprise and amaze even the most devoted Cam Penner fan. The symphony of sound and lyricism showcase the inevitable evolution of a growing artist; this album is a new start. ‘To Build a Fire’ speaks to the world. It’s folk. It’s rock n’ roll. It’s Cam Penner. Breathing fire into every note and lyric.  It’s full of everything we should be looking for, not only musically, but in life.